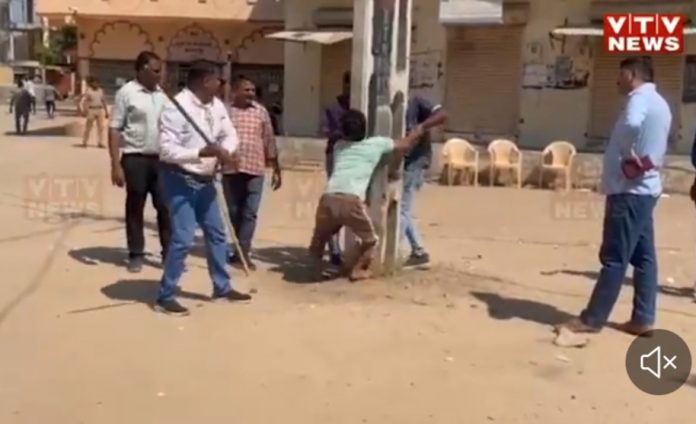 In front of the public on Tuesday, the police publicly flogged nine Muslim men in the Kheda region of Gujarat. As plainclothes police beat the men, spectators cheered.

The police alleged that they men threw stones at a Navratri Garba event.

Local news outlet VTV Gujarati News also shared the video and said “10-11 heretics were brought to the village, where the police taught them a lesson in public” in Undhela village.

The police inspector in charge of the region was also there, and the guys were instructed to “apologise to the public,” according to the report.

In response to the video, several users on Twitter questioned the police’s “kangaroo justice,” while many others defended the “quick fix”.

Muslims are tied to a pole and publicly flogged by the police, no less, with the crowd cheering.

This happened in Gujarat – the state where 11 Hindu men convicted of gang-rape & murder were released, garlanded and given a heroic welcome.

this is a state police lynching muslims in public on accusation of pelting stones in gujrat@IPS_Association which rule of IPC grants the right to gujrat state police to beat youth on roads in public view?

PS: the mob cheering as they lynch is NOT fringe pic.twitter.com/fO4OBEAel2

“This is a state police lynching Muslims in public on accusation of pelting stones in Gujrat,” another user on social media asking under which rule of IPC the Gujarat Police was beating the men in public.

Another social media user called it a “Kangaroo Court in ‘largest’ democracy”.

According to police officials, the village chief organised the Garba celebration in the community’s centre, which is close to a mosque and a temple. When a group from the opposing community arrived and ordered the women and men to stop, they were still taking part in the celebration.

“During Navratri celebrations in Undhela village last night, a group led by two people named Arif and Zahir started creating a disturbance. Later they pelted stones in which 6 got injured,” said Rajesh Gadhiya, DSP Kheda, according to ANI news agency.