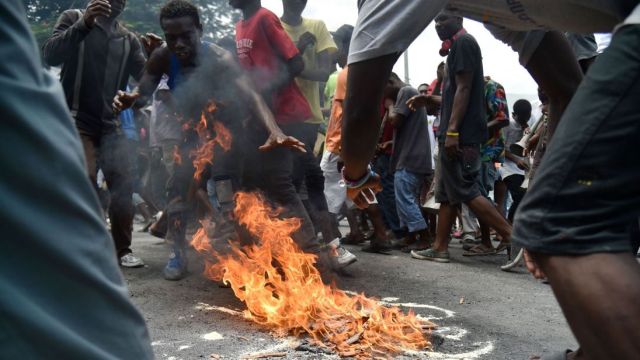 Port-au-Prince : Haitian Prime Minister Jack Guy Lafontant resigned on Saturday during a session in the lower house of the Parliament in which he was to have faced a no-confidence vote.

The session was held after violent protests erupted last weekend over fuel-price hikes, which the government later scrapped, Efe reported.

Once the Prime Minister’s resignation was announced, the speaker of the lower house, Gary Bodeau, posted a message on Twitter asking President Jovenel Moise “to choose a Prime Minister by general consent, bearing in mind the hopes of all sectors of national life.”

Saturday morning, before the session got underway, Bodeau had already expressed in a statement his wish that Lafontant would resign “for the good of the country”.

Because of the parliamentary session, which has sparked great expectations, and following the disturbances last weekend, the authorities deployed a strong police presence around the Haitian capital, especially outside the Parliament, the target of another protest called by the opposition.

The Prime Minister’s performance has been questioned for some time, and a few days before the violence broke out he was called by legislators to discuss where he was taking his government. He never showed up for that session.

Following the riots, sectors of the opposition, the local business class and even the ruling party demanded Lafontant’s resignation.

Last July 6, the government announced an increase of between 37 and 50 per cent on the price of fuel in this impoverished country, where over half the population lives on less than $2 a day.

The price hike of fuel including kerosene, widely used to light the homes of Haitians with little purchasing power, sparked violent protests in the streets, in which several people were killed.

The situation forced the government to drop the price increase the very next day. It had been the result of an accord signed with the International Monetary Fund (IMF), which this week proposed the gradual elimination of the subsidies on these products, since such aid basically benefits the wealthy.

Meanwhile, the UN Security Council has condemned the violence unleashed over the past few days in Haiti and called on all parties to remain calm and practice restraint.