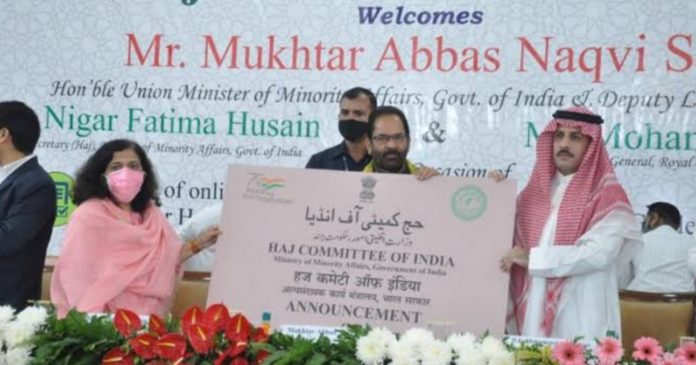 MUMBAI:  After two years’ ban on Haj owing to the Covid-19 crisis, the Indian government has announced the 2022 schedules for the Muslims, with a fully online process and a ‘swadeshi’ touch, Union Minority Affairs Minister Mukhtar Abbas Naqvi said here on Monday.

All Muslims who are fully vaccinated and desirous of proceeding for Haj next year, including women without male companions, can apply online or through the upgraded Haj Mobile App before the deadline of January 31, 2022, the minister said.

With an emphasis on ‘Vocal For Local’, Haj 2022 pilgrims will go with indigenous products, which will be bought in India.

“Earlier, Haj pilgrims used to buy bed sheets, pillows, towels, umbrellas and other items in Saudi Arabia in foreign currency. These will be available in India at about 50 per cent lower prices compared with Saudi Arabia,” said Naqvi.

All these items will be given to Haj pilgrims at their respective embarkation points in India, the minister told mediapersons with the Vice Consul-General of Saudi Arabia in Mumbai, Mohammed Abdul Karim Al-Enazi, Joint Secretary at the Centre Nigar Fatima and Haj Committee of India CEO Mohammed Yakoob Shekha, present.

For decades, Haj pilgrims used to buy all these items in Saudi Arabia in foreign currency, and though most products were Indian-made, they were available at twice or thrice the rates in Saudi Arabia, he pointed out.

According to some estimates, this will save crores of rupees for the Indian pilgrims, around 200,000 who go to perform the annual Haj pilgrimage, barring the 2020-2021 seasons.

The selection process will be as per the criterial and guidelines of both India and Saudi Arabia.

This time, the embarkation points for Haj 2022 have been slashed by half from 21 to just 10 in India, the minister said.

The embarkation points are: Ahmedabad, Bengaluru, Cochin, Delhi, Guwahati, Hyderabad, Kolkata, Lucknow, Mumbai, and Srinagar, with their respective states and other neighbouring regions in their jurisdiction.

A Digital Health Card, ‘E-Masiha’ and ‘E-Luggage Pre-tagging’ will provide all information pertaining to accommodation or transportation in Makkah-Madinah to all the pilgrims, he said.

Naqvi said that over 3,000 women without male companion had applied for the last two years’ Haj seasons which were cancelled and their applications would be valid for Haj-2022.

Besides, other women can also apply fresh for Haj-2022 and all these applications under the without ‘Mehram’ category shall be exempt from the lottery system. — IANS