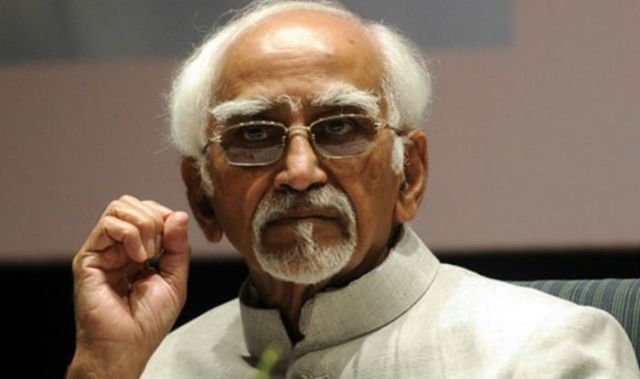 New Delhi: Former Vice President Mohammad Hamid Ansari and main opposition congress on Wednesday termed the insinuations and innuendos of the spokesperson of the BJP and in sections of media against them as character assassination of the worst kind and distorting the facts.

Ansari rejected the assertion that he had invited Nusrat Mirza, a Pakistani journalist who has claimed to have spied for the ISI, to India. He further said that a “litany of falsehood” had been spread about him by the BJP spokesperson and certain media outlets. 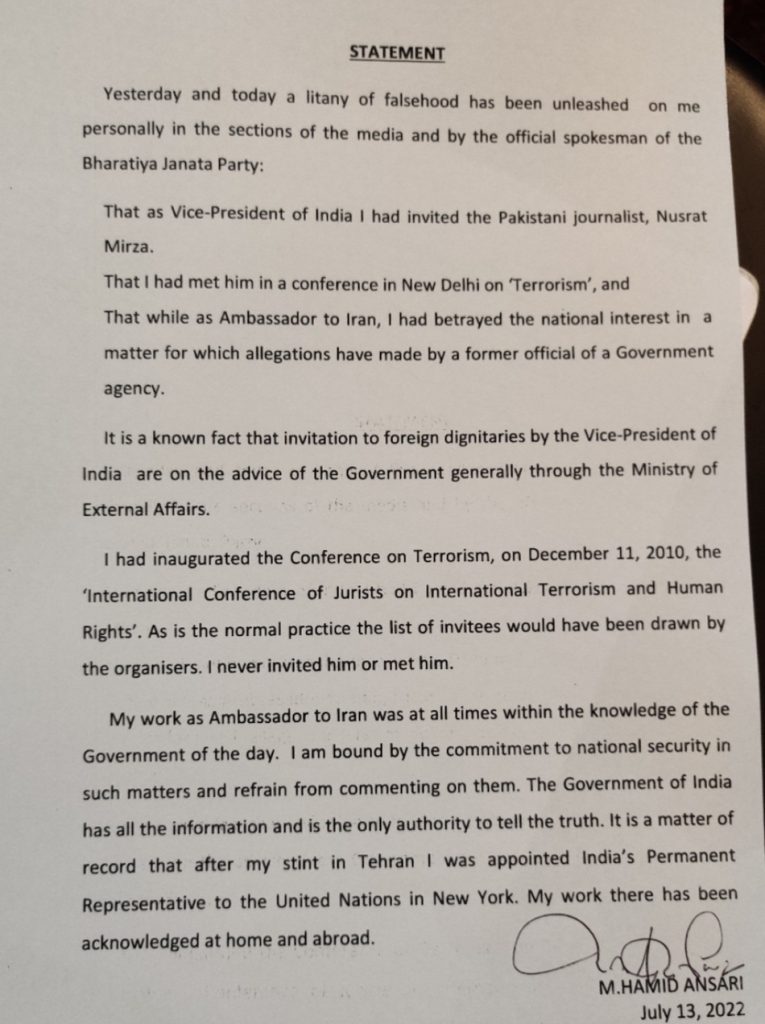 While the Congress stated it is imperative to denounce in the harshest terms possible the allegations and innuendos made by a BJP spokesperson against Congress president Sonia Gandhi and former VP Hamid Ansari.

There was a concentrated vilification campaign against Ansari and later against Sonia   Gandhi in the pro- BJP media for the last couple of days. Now today BJP officially joined the party to hurl accusations against both the leaders.

Surprisingly nowhere in the interview with Shakil Chaudhary, journalist Nusrat Mirza said he was invited by Hamid Ansari to India. He simply said in a row that “Hamen phir 2010 main bulaya gaya jab wahan Hamid Ansari sb naib sadar the” ( I was invited once again to India when Hamid Ansari sb was the vice president of India for a conference on terrorism).Nusrat also said then Pakistan foreign Minister Khurshid Kasuri helped him in getting visa for seven Indian cities.

Breaking his silence, the former Vice President issued an official statement vehemently refuting all the insinuations made against him. He said the Government of India has all the information and is the only authority to tell the truth.

Ansai further dismissed the BJP’s charge that he had compromised national interest while serving as India’s ambassador to Iran, which was based on remarks made by a former RAW official.

At a press briefing earlier in the day, BJP spokesman Gaurav Bhatia demanded Ansari and the Congress to be transparent regarding allegations made by Pakistani journalist Nusrat Mirza that he had visited India five times during the UPA rule and given sensitive information gathered here to his country’s spy agency ISI.

Bhatia referenced Mirza’s alleged remarks that Ansari had invited him to visit India, and that he had also seen Ansari, but the former vice president denied the allegations.

Dismissing the BJP spokesman’s allegation, ex VP   underlined that, “It is a known fact that invitations to foreign dignitaries by the Vice-President of India are on the advice of the government generally through the Ministry of External Affairs.”

He went on to say that “I had inaugurated the Conference on Terrorism, on December 11, 2010, the ‘International Conference of Jurists on International Terrorism and Human Rights’. As is the normal practice, the list of invitees would have been drawn by the organisers. I never invited him or met him.”

Ansari also emphasised that the government of the time was always aware of his activities while serving as ambassador to Iran.

I am obligated to uphold the pledge to national security in such situations, so I won’t make any comments, he said.

“The Government of India has all the information and is the only authority to tell the truth. It is a matter of record that after my stint in Tehran, I was appointed India’s Permanent Representative to the United Nations in New York. My work there has been acknowledged at home and abroad,” Ansari said.

“Insinuations and innuendos by a spokesperson of the BJP against Smt. Sonia Gandhi, President of the Indian National Congress and Shri Hamid Ansari, former Vice-President of India, are to be condemned in the strongest possible language.”

He underlined that the facts regarding the International Conference of Jurists on International Terrorism and Human Rights held on December 11, 2010 in New Delhi are already in the public domain.

He described the BJP spokesperson’s insinuations and innuendos as the worst kind of character assassination.

“The level that the Prime Minister and his party colleagues will stoop to debase public debate and spread their patented brand of lies is staggering. It reflects sickness of mind and lack of any form of integrity whatsoever, “Ramesh added.