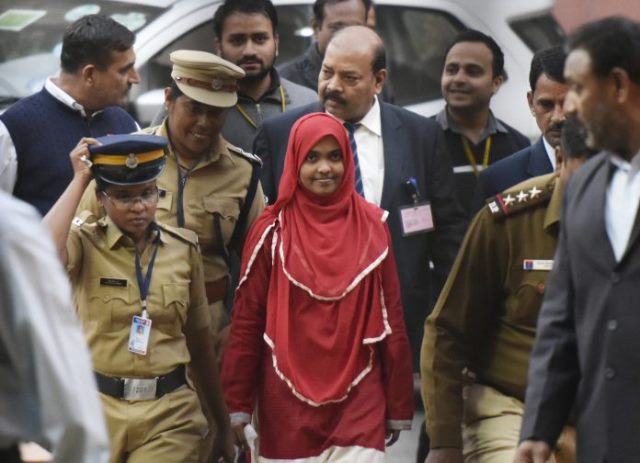 Kozhikode (Kerala) : On her first visit to her home state Kerala after the Supreme Court upheld her marriage with Shafin Jahan, Hadiya on Saturday said “all this happened as I embraced Islam”.

“The Constitution gives all the freedom to choose their religion, which is a fundamental right of every citizen and all this happened because I embraced Islam,” said Hadiya while interacting with the media.

Hadiya and her husband arrived here on Saturday from Salem and drove to the office of the Popular Front of India (PFI) where she briefly interacted with reporters.

“With the Supreme Court upholding our marriage, we feel we have got freedom,” Hadiya said here. The top court on March 8, set aside an order of the Kerala High Court that annulled their marriage.

“It was only the PFI that supported us all through our troubled times and what’s more surprising is that two Muslim organisations whom we approached refused to help us,” added Hadiya who will be in Kerala for three more days before returning to Salem in Tamil Nadu where she is studying.

A bench of Chief Justice Dipak Misra, Justice A.M. Khanwilkar and Justice D.Y. Chandrachud on Thursday said: “Hadiya alias Akhila Asokan is at liberty to pursue her future endeavours according to law.”

However, the court also said the National Investigation Agency (NIA) would continue its probe into the criminal dimension of the case, if any.

Hadiya’s father has said that he will go ahead in the case seeking legal recourse to the apex court’s latest judgement.

Tripura Violence: SC grants protection from arrest to journalist, others booked under UAPA