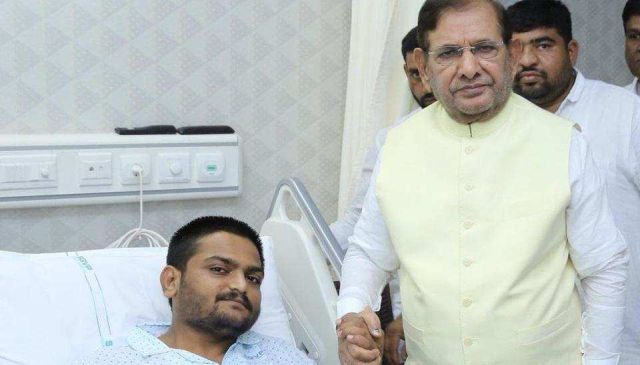 Ahmedabad : Firebrand Patidar agitation spearhead Hardik Patel is likely to break his fast in a day or two following the advice of veteran political leader and former Janata Dal (United) president Sharad Yadav, according to sources close to Patel.

Yadav, besides DMK stalwart A. Raja, was among those who called on fasting Patel in the hospital on Saturday.

On the insistence of Yadav, the 25-year-old Patel started taking water which he had stopped since Thursday evening after the deadline for the ultimatum issued by the Patidar Anamat Andolan Samiti (PAAS) to initiate talks expired without any response from the Gujarat Government.

Patel has demanded debt waiver for the farmers, reservation benefits to the Patels and release of his PAAS co-convenor Alpesh Kathiriya being held under sedition charges.

Saturday was the 15th day of his indefinite fast which started on August 25 at his residence after the government refused him permission for a venue to stage his public protest.

After meeting Hardik Patel, Yadav told reporters that he had advised him to give up fast and recover his health to “stay fit for a long drawn battle” against the BJP governments in the state and at the Centre.

He advised him there was no meaning losing health by fasting when the farmers required a leader like him to stand up and fight for their cause.

He claimed that Hardik promised him to consider his suggestion and act positively. “Today, I offered him water and he took it, I am sure tomorrow he will agree to break the fast and resume normal life,” Yadav said.

Meanwhile, the talks between a cabinet sub-committee and Naresh Patel, chief of the influential religious seat of Patidars, Khodaldham, and other Patidar community leaders mediating on behalf of Hardik and the PAAS, which was expected to be held on Saturday was deferred till Sunday.

Education Minister Bhupendrasinh Chudasama, Energy Minister Saurabh Patel, Revenue Minister Kaushik Patel and Minister of State for Home Pradeepsinh Jadeja had been tasked to talk to Naresh Patel on behalf of the government to negotiate on the issues of farm debt waiver, reservation formula and release of Kathiriya.

The state government sources, however, said there was no question of discussing the reservation issue as it was not possible under the constitution and the government had already appointed a commission to consider benefits on economic criteria for the people belonging to the non-reserved categories.