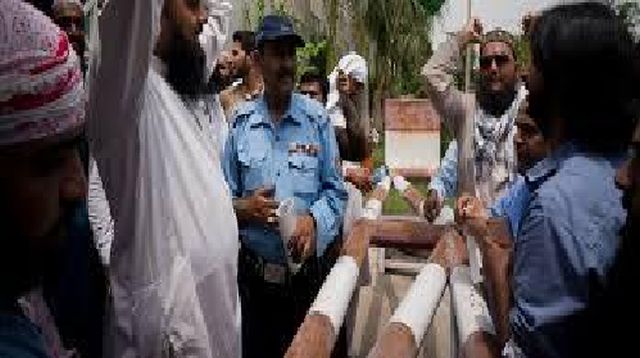 Islamabad : Some of Pakistan’s hardline Islamic groups, who defend the blasphemy law and have been accused of playing a role in global terrorism and murders of religious minorities, are contesting the July 25 general elections, triggering concerns of further radicalization of the conservative country.

These parties include Allah-o-Akbar Tehreek (AAT) with alleged links to terrorist groups, the Tehreek-e-Labbaik Pakistan (TLP), whose election promises include imposition of Islamic law in the country, and members of the Ahle Sunnat Wal Jamaat group, accused of inciting violence against religious minorities such as the Shia.

“You just have to give your vote to Islam,” cries out Rizwan Ahmed, a TLP candidate at a rally outside Islamabad.

The TLP was a relatively unknown group until November last year when it carried out massive protests against the Pakistani government, leading to the resignation of the Justice Minister over a change in the oath of senior officials which it considered blasphemous.

Eight months later, the TLP is one of parties that has fielded the maximum number of candidates, 178 for the National Parliament and 388 for the regional ones, according to Efe news.

According to Ahmed, the party seeks to bring Islam back to power since “Islam gives the solution to your every problem”.

One of TLP’s central points is the defence of the blasphemy law, which allows courts to punish insults to symbols of Islam even with the death penalty, although no one has ever been executed for it.

However, since 1986 at least 53 people, related to cases of blasphemy, including defendants released by courts, defence lawyers or relatives of alleged blasphemers, have been killed by mobs, the report said.

The TLP was founded in 2016 after the execution of Mumtaz Qadri, an extremist convicted for killing Punjab province’s former governor Salman Tasir in 2011, for demanding legislative changes and defence of the Christian Asia Bibi, condemned to death for insulting Prophet Muhammad.

The government withdrew the group from the terror list despite it being accused of inciting violence against minorities like the Shias.

At another rally in Islamabad, Saeed Ahmed, member of the Milli Muslim League (MML), highlighted his party’s work during disasters such as the 2010 floods and the 2005 earthquake.

MML, the political arm of the Jamaat-ud-Dawa (JuD), included in the terror list of the US and the UN and considered a cover for the Lashkar-e-Taiba (LeT) terrorist organization, is contesting the elections under the umbrella of the Allah-o-Akbar Tehreek as the poll body had refused to recognize it as a political party.

The US and India have accused the LeT of carrying out the 2008 Mumbai attacks, among others, in which 166 people died while JuD leader Hafiz Saeed has a bounty of $10 million against him by the US despite which he moves around freely in Pakistan. AAT on the other hand has fielded 200 candidates for the general election.

Human rights groups, mainstream political parties and the media have been repeatedly warning against the danger posed by the entry of these groups into the political arena.

“Be afraid of the day when these people will be sitting in this house,” said Pervaiz Rasheed, Senator of the Pakistan Muslim League-Nawaz, in the Senate on Monday.