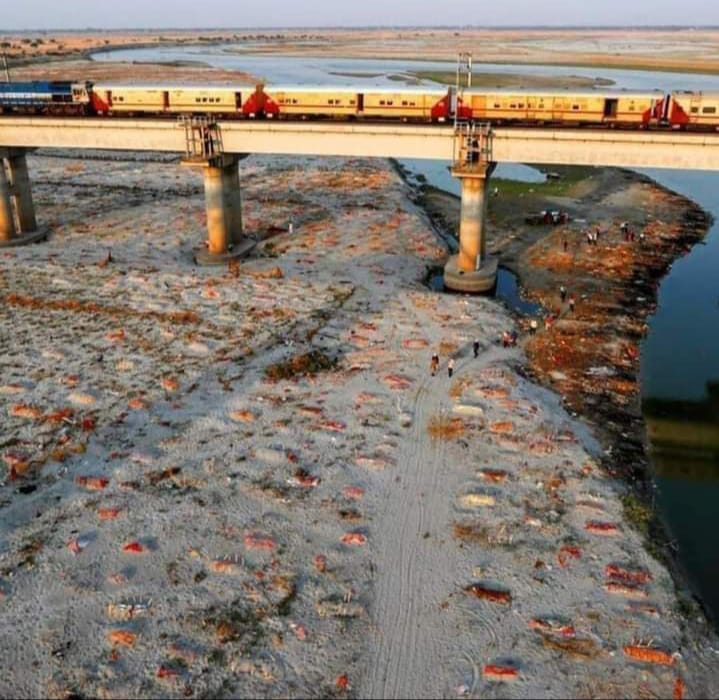 The BJP government at the Center and UP is running with a brute majority and looks with disdain towards probably everything, particularly to those voices from media which tends to put the otherwise reality also.

UP in throes of COVID-19

UP is the largest populated state in India and holds the key for any government at the Center and is ruled by BJP as a sham.  The way BJP has mishandled the unfolding COVID-19 second wave, has been nothing more as shameless in the history of independent India. People have been reduced to paupers and have been hit-so-hard, nationwide too, that throughout the country there is a sense of desperation with the most dilapidated voices coming out from UP. BJP rules at the Centre too.

The prime reason for the devastating situation in UP, where there is almost a collapse of medical infrastructure, is the way Election Commission, without caring a fig and under the influence of  BJP, conducted the local bodies elections in which over 1600 teachers died while plying in election duty during the Panchayat polls, tells News18 on May 18. Why did it happen? As nearly every or every second or third village in UP has been found with a COVID-19 patient? The reason is due to Panchayat polls, as all relatives, friends and supporters were imported back from far-off Maharashtra, Madhya Pradesh, Punjab, Haryana and Rajasthan etc. This mad rush back home, irrespective of last year, when millions were to rush back due to lockdown, brought into the Corona-Virus chain, and which, brought UP on its knees.

The Corona stigma and UP as a land of mass graves

The worst is that in UP Corona Virus is branded ‘a stigma’ as people first of all, out of the fear of boycott or their homes cordoned-off, do not report it. Therefore, thousands have died in their homes without reporting to authorities! And, thousands have passed-away in hospitals without Oxygen, their relatives consoled and happy (sic) with a Corona-Negative report, which hospitals as a policy are always eager to issue, in order to reduces the number of deaths due to Corona, and since Corona Period has been declared a pandemic, it would also reduce the numbers seeking compensation from the government! Which of course, the government is duty-bound to pay.

There are thousands and thousands buried under mass makeshift shallow graves around every river or riverbed in UP. Thousands of such saffron/white cloth covered graves can be found on the banks of river Ganga, Yamuna, Ghagra  etc well until Bihar ( all of Hindus) and the UP government has even got the cloth- covering be removed. Imagine when the disrobed bodies, from even their shrouds, would be uncovered after the incoming rainy season! It has already started, as The Tribune reported on May 16, as to how the rains have started to uncover the graves. People have been left with virtually no money- even for the last rites of their dead. The government has not been able to even provide ‘respect-in-death’ as reports of dogs and animals eating into the bodies are all abound. NDTV reported a video on May 30, in which a dead body of a COVID-Positive patient was thrown by relatives in river Rapti. It also reported on May 31, a dead body was being carried in a garbage van for post mortem by police.  The foreign media is crying that ‘4.2 million estimated deaths as the worst scenario in India might have taken place’ , according to New York Times on May 25, which the government has dismissed as baseless for it lacked evidence. But, evidence is for all to see, as UP government registered a single mobile number for 7300 people for COVID-tests, tells National Herald on April 10. In Kanpur people withdrew Rs 20,000 Cr in a matter of 50 days to meet to the medical expenses of their families. Yet, in between April 16 to May 5, officially 196 people died of Corona-Virus, but data from seven crematoriums show nearly 8000 cremations exposed a extensive report in BBC on May 19. Dainik Bhaskar on May 25, removed the lid from government concealment which had declared that in 25 districts in the last 50 days 3918 died out of COVID-19, whereas, from 512 villages/blocks out of these districts there were 14,482 cremations!

How to put the numbers right

But, then what can be the strategy to figure out the real number of deaths as the UP government or the Central government is hell bent to fudge the figures in this ever evolving death-scam in the country. The best is for the representatives of the newly elected local bodies, to prepare a scrutinized report and submit it to their respective DMs, as that would make it much easier for the government bodies to plan the social-and economic security to the bereaved families. It is quite understood that the government,  even after that, won’t be budging from its stand to hide the number of deaths, hence, the representatives may well go ahead to get the lists be published, and even put them on social-media to expose the exact number of deaths, so that the damage-done by this pandemic may be accessed and assuaged by the people at large but getting to the real-ground scenario.

There can be no doubt that a social-crime has been perpetrated by the government and a responsible government is never expected to indulge in such activity, as data is the first step to provide social-economic security to the kith-and-kin of those who have died, and it is here where the Panchayat polls representatives may take a vow to put forth the list to their DMs so that a social-economic guarantee may be provided to the hapless citizens along with the deserving compensation.  It may be reiterated that Gram Pradhans owe a responsibility and may devise a chart to find out Name of patient/ Age/ Sex/ Village and Tehsil/ District Hospital Ward/Room Number in which patient was admitted/ whether got admission in hospital or died at home/ Could Oxygen, injection or medicine was provided/ time and date of death/reason for death.

What is also more than surprising is that there was not even a remote reference to ‘these number of  deaths’‘ between DMs and PM Narendra Modi which definitely points as if we are already in the middle of the worst death-scam being orchestrated in the country. As after all, when the government has already scuttled the data, it need not have to show-up to the widows and orphans. The way ‘dead bodies and mass graves pictures’ have appeared in media and mocked by  BJP as a reflection of our Indian heritage will go a long way to make this blot be washed-away in totality.

The only way-out to face the third wave

There is not a single village in UP where people have not been affected by cold, cough and fever and thousands have also recovered from it but the medical facilities are concentrated only in district headquarters and the only way out to reach to the damning scarcity of Oxygen is to make it available  at least as a  dozen Oxygen cylinders to local bodies representatives and those under home quarantine may be shifted to primary schools, inter and degree college or Panchayat bhawans to meet to the medical needs. Doctors be deployed for time-to-time monitoring and medical-camps be organized at Tehsil levels and only serious patients be moved to headquarters as the broken medical infrastructure at primary and community health centers is not so a hidden reality.

In fact ventilators should now be guaranteed at all such places to put into order our defense-mechanism in the wake of the coming third-wave.  Ambulance, mask and PPE kit has to be now in every village, apart from the sanitization programme along with sanitizers and those with serious ailments like   a heart disease, kidney or cancer should be enlisted for a guaranteed medical treatment at headquarters. There ought to be committees formed to oversee the vaccination and RT-PCR tests being performed, and that it gets channelized deep into the villages. India has to really wake-up to the catastrophe as the likes of RSS Chief Mohan Bhagwat will continue to liken those who have died in this pandemic  to have  attained Mukti (salvation)

The writer is a former State Information Commissioner and a political analyst.