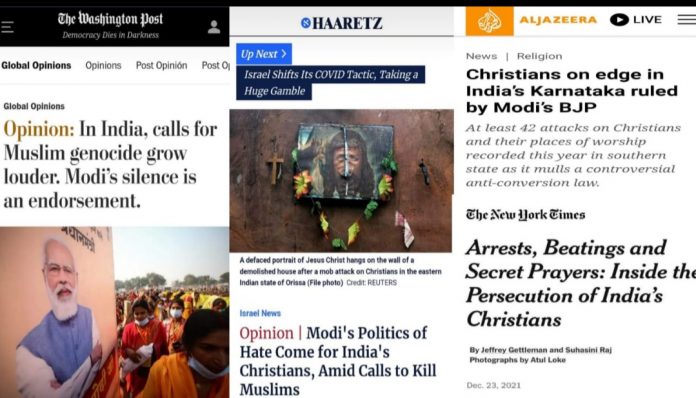 While the Indians have seemingly normalised hate speech against minorities under the Narendra Modi dispensation, the open call for genocide of Muslims and abusive language against father of nation have seemingly jolted the conscience of, at least, a section of Indian press which has strongly demanded action against the hatemongers. However, the international media outlets flagged the concern with even more intensity this time.

In the two religious conclaves, the Hindutva zealots made even more viscerally provocative speeches triggering lots of traction in global press, seeking Rohingya-like mass murder and exodus of Indian Muslims. They also take a pledge to turn India into a Hindu Rashtra (Hindu State).

Even Prime Minister Narendra Modi, Uttar Pradesh CMs and deputy CMs also made provocative speeches during their rallies, observed several international dailies and highlighted that the ruling dispensation continues to ignore the increasing danger posed to the world’s largest democracy. International news outlets are criticising the silence of Modi in “the face of blatant calls for communally charged violence.”

The New York Times reported that the Haridwar event produced the “most blatant and alarming call for violence in recent years”. It also noted that the attacks on Christians saying, “anti-Christian vigilantes are sweeping through villages, storming churches, burning Christian literature, attacking schools and assaulting worshipers.” The newspaper in another report titled, “India’s Christians Attacked Under Anti-Conversion Laws” noted “Minorities consider themselves insecure,” the report said and added the Hindu extremists were forcing Christians in India to convert to Hinduism.

The BBC report also flagged concern over PM’s silence and inaction, claiming that the “Hindu religious zealots” enjoy the “support – both open and tacit.” It noted, “frequency of  hate crimes against Muslims and other minorities has increased since 2014, when the BJP first came to power. It noted that no action has been taken against Yati Narsinghanand Saraswati, one of the speakers at Haridwar conclave, despite the fact “he has made several anti-Muslim statements in the past.”

The Washington  Post noted, “Hindu leaders form a paramilitary force of monks who they claim will lead an armed fight against the 220 million Muslim population in India.” It also noted that the ruling dispensation ignored the danger even as “Hindu nationalist who assassinated Mohandas  K Gandhi,  a global symbol of nonviolent resistance, is glorified by national leaders.”

Interestingly, The Haaretz, published from the Hindutva’s darling state of Israel, took on PM Modi severely in its opinion piece. It wrote, “The Hindu Rashtra is already here in India: only the burial rites of the Constitution, which promises equality to all citizens, have to be conducted. Modi is the high priest of the Hindu Rashtra: he repeatedly puts his faith on public display, scrapping the norms that preserve premiers as heads of a secular republic. The paper added that Hindutva made much of Hindu “historical grievances and promoted a feeling of victimhood in the overwhelming Hindu majority”. In another piece, the paper wrote,  “Modi’s Hindu nationalists have turned Gandhi’s killer into a hero of India, feeding vigilante violence against Muslims, redefining ‘patriotism’ as blind obedience and tarring anti-Modi dissent as terrorism.” It wrote, “India’s tiny Christian minority now joins Muslims as targets of the majoritarian mob, baying for a theocratic Hindu state with Modi as high priest.

The Aljazeera also assailed the silence of Modi. It noted that the repeated “assaults on Christians have also resulted in them facing social boycotts and threats to their livelihood. The fear is so strong that some victims do not even want to speak to the media.”

Almost all the newspapers assailed inaction and mentioned incidents where Muslims and Christians are increasingly facing hate crimes as Hindutva groups creating disruption and commotion  periodically with full immunity.