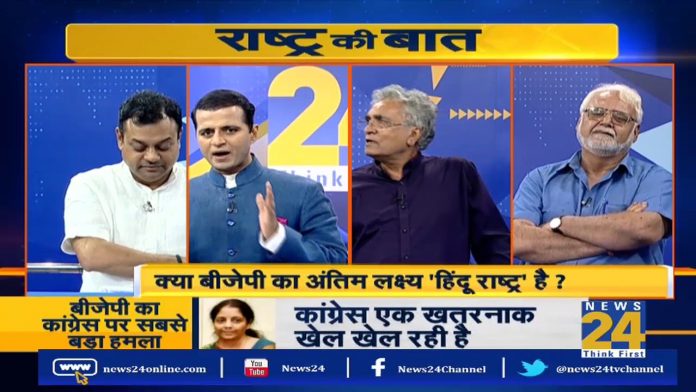 As an author and street theatre performer challenging the politics of religious bigotry, religious based nationalisms, persecution of women under the garb of religious personal laws and violence against Dalits, I am constantly target of abuses, threats and derision. When I expose the Hindutva politics which not only aggressively calls upon for a Hindu nation where Muslims and Christians would not be allowed to live and Manusmriti would be law of the land thus relegating Hindu women and Dalits to a sub-human status, I am declared to be ‘harami’, ‘katwa’, ‘Pakistani’, ‘rapist like other Muslims’, ‘illegal child of Arab Shiekh’, ‘Islamic State agent’, ‘anti-Hindu’, ‘namak haram who should be deported’ and so on. While denigrating me this anti-social lot uses unprintable language about Islam and its Prophet.

Interestingly, when I write against the persecution of women and minorities in Pakistan and Bangladesh, dictatorships in tribal Islamic kingdoms, triple-talaq, polygamy and use of Shariat as a convenient tool to suppress Muslim women I am declared to be ‘anti-Muslim’, ‘Zionist agent’, ‘RSS collaborator’ and what not. I am even asked to change my name from Shamsul Islam (sun of Islam) to ‘dushman-e-Islam (enemy of Islam)’.

This kind of denigration is painful but gives me satisfaction that if both the Hindu-Muslim religious bigots are attacking me, I am on the right path. The trollers are cowards who abuse and threaten with fake identities and part of mobs which  have been swayed by the polarizing politics of the rulers.

The Indian media, specially the electronic one was being swayed by Hindutva national discourse has been evident for quite some time. I was often victim of the transgression when a producer of a story on Hindutva organizations would edit/ alter your byte in such a manner that opposite to what your take was would be aired. To cite an example, a prominent TV channel did a story on the murder of Gandhi. In my byte I talked of Sardar Patel’s view on the organizational linkages of the killers. Immediately after Gandhi’s murder as home minister he was not clear about the identity of killers (though by November 1948 Sardar had found RSS and Hindu Mahasabha responsible for this murder) so in a February 27, 1948 letter Sardar told Nehru that RSS was not involved. But he also shared a crucial fact with the then PM that “In the case of secret organization like the RSS which has no records, registers, etc. securing of authentic information whether a particular individual is active worker or not is rendered a very difficult task.”

Sreenivasan Jain, the producer/anchor of the story used the part of the letter which read that RSS was not involved in the murder but dropped the above take of Sardar that it was difficult task to know about a member of “secret organization like RSS”. It was done to substantiate Jain’s own conclusion that there was no hard proof to prove that Hindutva organization was involved in the murder.

Unfortunately, the situation in the TV studios has worsened beyond ones worst fears. The lynch mentality on roads has reached the TV studios in full steam, with one or two exceptions, of the so called ‘free press’. Whoever opposes the Hindutva narrative on live discussions is branded anti-national, anti-Hindu and a Pakistani. If you happen to be there with a Muslim name, opposing the Hindu nationalist narrative you are showered with abuses and threatened on mike and off the mike.

It was at the end of the second week of July (2018) that I was invited for a 45 minute long live TV debate on the theme whether India required a Hindu nation or secular India. This debate was taking place in the aftermath of Congress MP Shashi Tharoor’s comment that if Modi came to power in 2019, India would turn into a Hindu Pakistan. The other panellists were  Sambit Patra, spokperson BJP, one professor Kapil Kumar, who was supposed to be an independent expert and Congress representative, Premchand Mishra.

Even before debate on the Hindu nation was started, professor declared that  instead we should discuss Muslims who wanted triple-talaq, halala and 5 marriages to continue. Sambit joined the chorus, declared that Hindu and Hindustan were synonymous and main danger was Congress which was doing Muslim politics. He talked about persecution of Hindus by Muslims in the past. I asked the anchor what we were discussing but there was no stopping Sambit and the professor. I asked why he chose only Muslim period for narrating persecution out of 5 thousand years of Indian civilization and if for the crimes of Muslim rulers all Indian Muslims were responsible then who should be held responsible for kidnapping of mother Sita and disrobing of Darupadi, both Sambit  and professor shouted that I was insulting Hinduism and mother Sita. In fact, the learned anchor asked me not to go to that old history! So only the crimes of the Muslim rulers were under scrutiny.

In this debate I was described as rapist, Islamic State agent and Pakistan supporter. In order to emphasize the pro-Muslim character of Congress, Sambit produced a press clipping of 2014 in which it was written that Election Commission of India received a complaint that Rahul had declared that thousands of Muslims would be butchered if Modi came to power in 2014 elections. The clipping was presented as if Election Commission had censured Rahul on this. The Congress representative should have objected to this manufactured fact. He kept on smiling and I had to intervene, asking Sambit to share the fact whether Election Commission took cognizance of the allegation.

Instead of sharing the reality he declared that I was being paid money through cheques by Congress for defending Rahul. He in his clowning style repeated this allegation 5 times but Congress representative did not intervene and kept smiling. The anchor was also in a forgetful mode.

In the meantime professor after calling me names walked out of the programme (but remained in the studio) demanding that instead of my talking on Hindu nation, I should be asked about triple-talaq, halala and permission of marrying 5 times (how number increased from 4 to 5 nobody knows). During the break sitting in the studio there he abused me as ‘bastard’ and ‘behenchod (fucker of the sister)’. The anchor, who was supposed to guide the meaningful debate, the defender of the Hindu nation, Sambit and representative of Congress kept quiet, this professor was not asked to leave even at this stage.

The worst was yet to follow. The anchor instead of concluding discussion on Hindu nation suddenly announced that “Shamsul Islam I had promised professor Kapil Kumar to seek your answer on the issue why Muslims do not give equal rights to Muslim women”, he continued, that Muslims do not want one nation one law and wanted to practice triple-talaq, halala and polygamy. I tried to tell him that Muslims are not a homogenous lot but would follow the judgment of the Supreme Court. But anchor insisting that I was one of those who believed in all these anti-woman practices, wanted my personal view. I told him that I did not believe in all such things. The debated ended with the following words of the anchor addressed to the abuser professor Kapil Kumar, “Kapil sir you must be a bit happy that I got reply (from Shamsul Islam) to your question”. Thus ended debate on RSS agenda of converting India into a Hindu nation!

THE LINK OF THIS TERRIBLE EPISODE IS PASTED BELOW SO THAT WE CAN UNDERSTAND HOW MOB LYNCHING HAS REACHED TV STUDIOS.