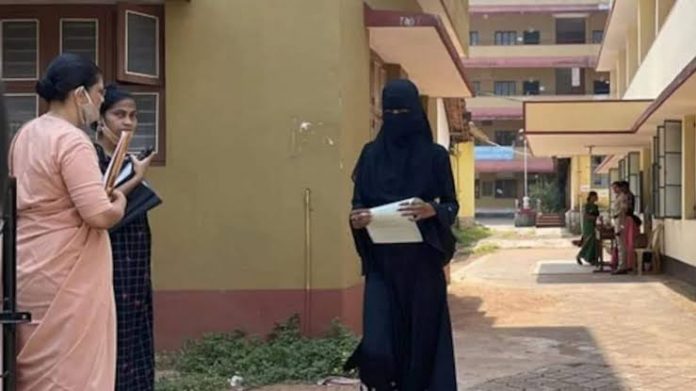 YADGIR, KARNATAKA : Refusing to take off their hijab, six students in Karnataka’s Yadgir district returned home without writing their Class 12 exams on Monday.

The incident took place at the Government Pre-University College in Yadgir.

The girl students, who had come to write their economics exam, insisted with the authorities to let them write the paper wearing hijab. After their request was turned down, the students walked out from the examination centre, refusing to take off their hijab.

The crucial Class 12 exams are being conducted across the state. Some Muslim students, however, are writing their papers without wearing hijab.

As many as 68,84,255 students have enrolled for the board exams, which began on April 22 amid tight security in the backdrop of the hijab row.

The special bench of the Karnataka High Court had earlier dismissed the petitions seeking to allow students to attend classes wearing hijab. It also mentioned that wearing hijab is not an essential part of Islam.

Following the court order, the Karnataka government banned hijab in classrooms and announced that hijab-clad students and teachers will not be allowed inside the examination centres.

Aliya Assadi, one of the petitioners, took to Twitter to slam the decision to ban entry of hijab-clad students.

“Again and again we face disappointment! BJP MLA Raghupathy Bhat had threatened us with criminal cases against us if we go to attend exams tomorrow. What is the crime here? Where is our country headed to,” she had questioned.

On April 22, Assadi and Resham Farooq tried to enter the examination centre in Udupi clad in hijab. BJP MLA Raghupathy Bhat had lashed out at them for ‘disturbing’ other students, saying they were just trying to create a scene before the media.

Bhat had also warned that if the students repeat their act, they should be charged with a criminal case for contempt of court. — IANS