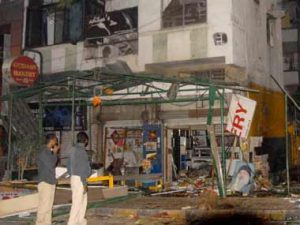 Special Judge Dhote will pronounce the quantum of sentence for Baig April 18.

The blast occurred Feb 13, 2010, at the German Bakery in Pune’s upmarket Koregaon Park. The bakery was a popular haunt of youngsters and foreign tourists.

In September 2010, about seven months after the blast, Baig was nabbed from Udgir, Latur district of Maharashtra, by the state’s Anti-Terrorism Squad.

Special Public Prosecutor Raja Thakre told media persons after the ruling that the court had found Baig guilty on various counts under Indian Penal Code Sections 302, 307, 120b, 153A, 325, 326, and others, pertaining to murder, conspiracy, destroying property and other serious crimes.

Baig’s lawyer A. Rahman said that though they respected the verdict delivered Monday, they would appeal against it in the Bombay High Court.—IANS.