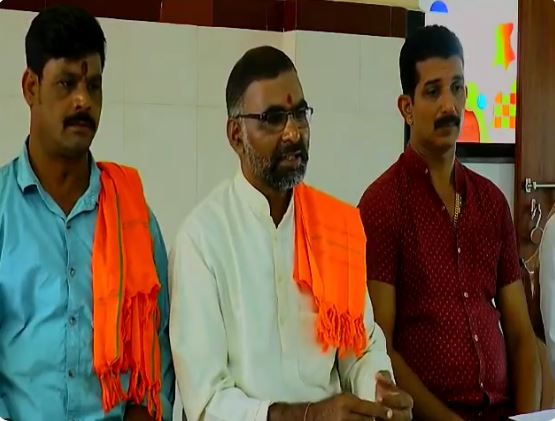 Dharmendra, general secretary of Akhil Bharat Hindu Mahasabha’s Karnataka unit, was arrested for issuing death threats to Chief Minister and BJP politician Basavaraj Bommai over the demolition of a temple in Nanjangud.

The demolition of the temple had been ordered by the Supreme Court.

The Hindutva leader, Dharmendra, in a press conference on Saturday, had warned the BJP State Government of “teaching a lesson” adding that they “didn’t even spare Mahatma Gandhi to protect Hindus.”

“We didn’t spare Gandhi ji, what do you amount to then? If Gandhi ji could be assassinated to condemn atrocities on Hindus, do you think we won’t consider the same for you? Please remember it will become very difficult for you Basavaraj Bommai, B.S. Yediyurappa and Endowments minister Shashikala Jolle,” General Secretary of Hindu Mahasabha’s Karnataka unit Dharmendra said.

"When we didn't spare Mahatma Gandhi & killed him to safeguard attack on Hindus, what makes u think we will spare you?".This provocative speech was made by Akhila bhartiya Hindu Mahasabha leader Dharmendra to @BSBommai @BSYBJP & @ShashikalaJolle over temple demolitions in K'taka. pic.twitter.com/ss5f6jNOng

He denounced the Supreme Court order as an attempt to appease Christians and Muslims and went on to announce protests on the matter, which were to be held on Wednesday, September 22.

He was arrested on the basis of a complaint made by the Hindu Mahasabha state president Lohith Kumar for misusing the organisation’s name and threatening the Karnataka chief minister, reported India Today.