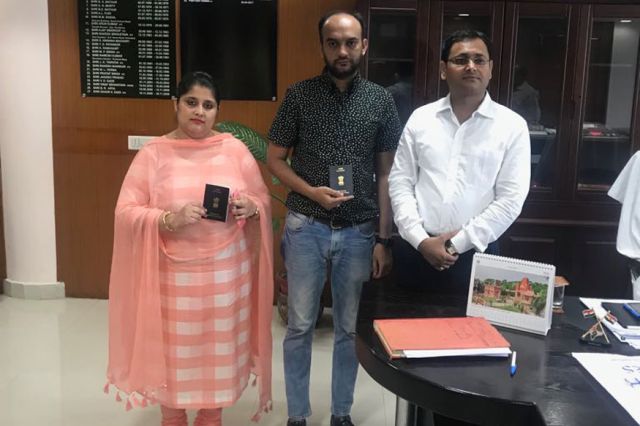 Lucknow : A Hindu woman married to a Muslim got her passport on Thursday, following External Affairs Minister Sushma Swaraj’s intervention, barely 24 hours after a passport officer rejected her application on the grounds that she had not changed her surname.

Regional Passport Official Piyush Verma on Thursday gave the passport to Tanvi Sethi while the passport of her husband Mohammad Anas Siddiqui was renewed and also handed over.

Sethi alleged misbehaviour by passport officer Vikas Mishra on Wednesday when she had gone to the passport office here. She said her passport application was rejected on the grounds that she had not changed her surname even after 12 years of marriage to a Muslim man.

She later tweeted to the Prime Minister’s Office (PMO) and Sushma Swaraj with her complaint. Both responded to her plea.

Passport officer Mishra has since been transferred to Gorakhpur and an explanation has been sought from him, an official told IANS.

Sethi and her husband said they were very happy at the alacrity with which the PMO and the MEA responded.

The officer accused of misbehaviour, however, denied the charges and said he had only told Sethi of the rules laid down in such cases.

Senior officials said that old rules mandated that a marriage certificate be produced in cases of inter-religious marriages during the passport application procedure, though adding that the officer was not right in ill-treating the woman and shouting at her.