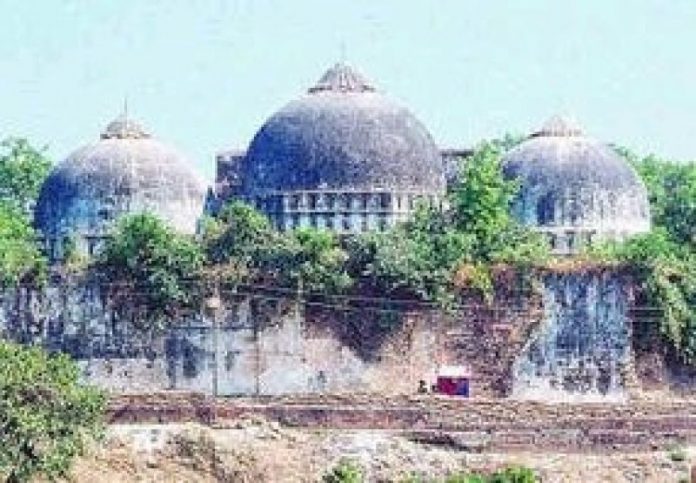 New Delhi, 20 Aug : On the eighth day of the Ayodhya case on Tuesday, the Hindu parties cited the recovery of a 12th century stone slab from the site of the disputed mosque in 1992 with inscriptions in Sanskrit establishing the existence of a temple at that place.

Senior advocate C.S. Vaidyanathan, counsel for Ram Lalla Virajma, informed the Constitution bench headed by Chief Justice Ranjan Gogoi that the authenticity of the epigraphic evidence inscribed on the slab had not been questioned so far.

The slab was stuck between the walls of the mosque and it fell down during the destruction of the mosque. The dimensions of the slab is 4 feet by 2 feet and it is diagonally broken into two pieces.

Although broken, it did not hamper the deciphering of the inscriptions on the slab in Sanskrit which categorically established the existence of a temple and its essence linked to Lord Vishnu and his incarnation Lord Ram, argued Vaidyanathan.

The counsel argued that the Sanskrit inscriptions had been analysed by a senior member of the Archaeological Survey of India who had given his opinion on the paleographical and orthographical validity of the inscriptions.

“The verse on the slab points to King Gobind Chandra, between 1114-1155 AD, who ruled Ayodhya. Verses also indicate the faith of the people in Lord Vishnu and a temple of Vishnu Hari at the site.

“It also gives information on the family lineage of the King, and identified Ayodhya as the capital of Saket Mandla,” submitted Vaidyanathan before the court.

The Hindu parties cited the evidence of K.V. Ramesh, a senior ASI official who translated the Sanskrit inscriptions and concluded that it dated to 12th century AD.

The court queried if there had been any challenge to the authenticity of the slab. The counsel replied in the negative.

He told the court that the mode of recovery of the slab had been put under doubt as it was recovered in the presence of a journalist, Ashok Chandra, who had connections with the RSS.

Both Ashok and Ramesh have recorded their statements as witnesses in the case.

On the current whereabouts of the slab, Vaidyanathan replied that it in the custody of the State.

He argued that the ASI report established a huge hall, mainly used for worship by people having faith in Hindu religion, with several pillars, and there was no doubt on the credibility of this report. IANS