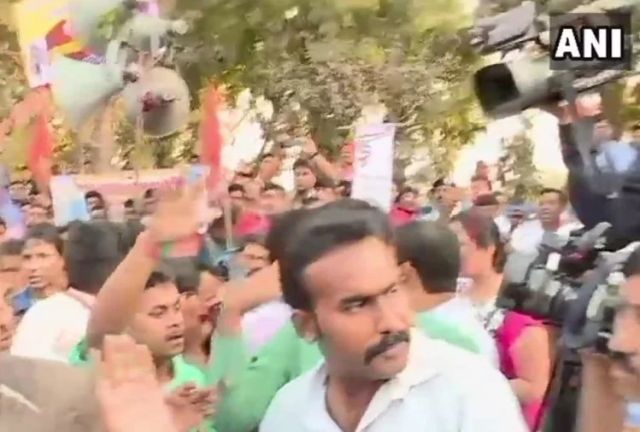 Kolkata : The chief of Hindu Samhati, a hardliner Hindu outfit in West Bengal, and three of its activists were on Wednesday arrested for allegedly attacking journalists at an event on occasion of the organisation’s 10th foundation day here, a senior police officer said.

“Hindu Samhati chief Tapan Ghosh and three other activists have been arrested in the case of assault on media persons in Kolkata on Wednesday evening,” Joint Commissioner of Kolkata Police (Crime) Praveen Kumar Tripathi said.

Reporters and camera persons of various media houses were allegedly beaten up by the activists present at the meeting, after they tried to talk to the members of a Muslim family who allegedly converted to Hinduism at the event.

Ghosh, also the founder of Hindu Samhati, was present on stage when the scuffle took place. He was later arrested after being interrogated, police said.

State Chief Minister Mamata Banerjee condemned the attack on journalists and said strict action would be taken against the offenders.

“The media has every right to work independently. The way they (Hindu Samhati) attacked and heckled the media persons today is deplorable. I demand strict administrative action against the fringe elements,” Trinamool Congress Secretary General Partha Chatterjee said.

The state unit of BJP distanced itself from the accused organisation and condemned the attack on media.

“Media is one of the pillars of democracy. They should not be attacked like this. Different organisations can have different philosophy. If they do not like the media’s point of view, they can ignore it but such attacks on media is condemnable,” Bengal BJP chief Dilip Ghosh said.

Police said they would look into the reports of religious conversion at the event.

“We have heard that there was a case of religious conversion in public at the end of the event. We will investigate the matter,” an officer said.

Formed in 2008, the Hindu Samhati website describes itself as an NGO that is “the icon of hope to Hindus in West Bengal” and says it regularly monitors and reports violence against Hindus in the state.

The outfit claims to have organisational strength in 12 of the 23 districts and can influence votes in 80 of the 294 Assembly seats of the state.