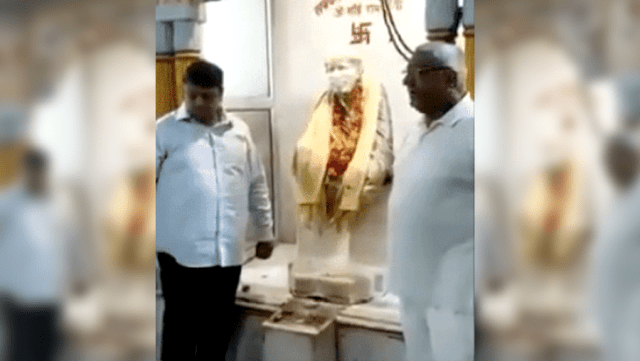 New Delhi: Police arrested a 50-year-old real estate businessman days after a video clip went viral, in which he was seen calling Sai Baba a ”jihadi” and demolishing his idol at a temple in New Delhi’s Sahpur Jat area. He was produced before a Delhi court and sent to 14-day judicial custody, reported The Indian Express.

An FIR had been registered against the man identified as Padam Panwar under IPC sections 295-A (deliberate and malicious acts, intended to outrage religious feelings of any class by insulting its religion or religious beliefs) and 153-A (promoting enmity between different groups on grounds of religion, race, residence, language, etc) at Hauz Khas police station.

Followers of Sai Baba had filed a complaint against demolition of his idol at the Hauz Khas police station.

“A few people came in and broke the idol of Shri Sai Baba while saying the idol should be removed as he is not a Hindu god but a Muslim. We request you to kindly take action against the culprits who conducted this heinous crime as this hurts the sentiments of people who believe in Sai Baba. We request you to ensure the restoration of Baba’s idol in the same temple premises as soon as possible,” read the complaint.

Yati Narsinganand Saraswati, who is infamous for his remarks against Islam and Prophet Muhammad, had congratulated Panwar for breaking the idol.

”If I had my way, jihadis like Sai won’t be able to enter temples,” he had said.