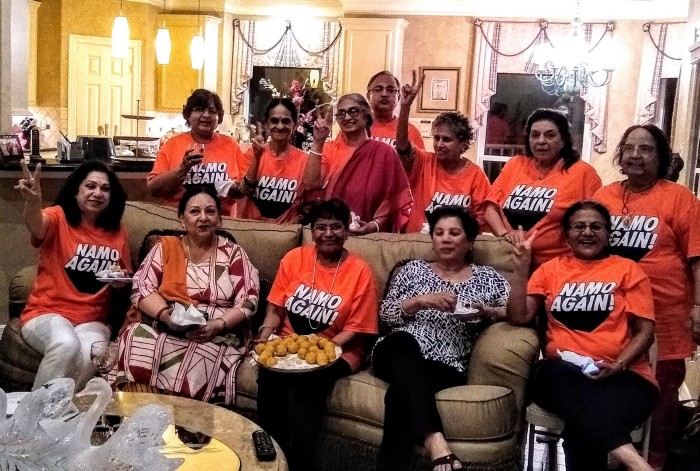 Learning from the American Israeli Political Action Committee, the Hindutva fascist group in India, the RSS, in its strategy meeting as early as 2012, concluded that through its sympathizers and members in the US, it could emulate the Jewish groups. It decided to create a lobby to impact the US policies towards a BJP controlled India if it has sufficient US Congress and Senate members with a supporting President. The US Hindu organizations that fed them with vital information of the US electoral process and its money-based politics were the Hindu Vishwa Parishad of America (VHPA) formed in 1970 and the Hindu American Federation, HAF, in 2003. Both these groups owe their origin to Golwalkar, the Hindutva leader who was an ardent supporter of Hitler and his policy of the annihilation of Jews.

The Hindutva lobby is now mature and ready to flex its muscles in the 2020 election. Its leader, the Prime Minister of India, Narendra Modi, openly casts his non-existing vote for Trump. Its mother outfits RSS and BJP instruct the VHP, HAF, and different outfits, including Hindu Republican and Hindu Democratic Pacs, to make inroads in the political circles. It is an example of how a foreign country uses its influence in the US to impact elections. The Pacs have donated extensively, mostly to Hindu candidates.

In this election, the Hindutva lobby is investing heavily in a candidate contesting an open seat in Texas’s 22nd Congressional district. The Hindutva forces in their internal circles describe Sri Preston Kulkarni as a Hindu warrior in the Dharam Yudh (religious war) to preserve the interest of the fascist group of RSS. Even though the candidate pretends to be a secularist, yet he has no objections to the funds, the Hindutva supporters have contributed to his campaign. The report of Peter Freidrich explains the flow of Hindutva money to the candidate in detail.

District 22 covers a mostly suburban south-central portion of the Greater Houston metropolitan area. It included the majority of Fort Bend County, including most of the Sugarland, Missouri City, Rosenberg, Needville, and the county seat of Richmond and the Greater Katy area west of Houston. Additionally, the district also contains portions of northern Brazoria County, including Pearland and Alvin, and a small part of southeast Harris County centered on Friendswood.

Republican Pete Olson represents the district, who is not running in 2020. It has a population of 881, 407, and the majority of the residents identifies as Republicans. Sri Preston Kulkarni, who was the 2018 Democratic nominee for this seat, faces off once again for this seat, but this time against Fort Bend County incumbent Sheriff Troy Nehls.

The Muslim voters are swing voters as they may determine the outcome. In the last election, Olson defeated Sri by a margin of less than 14,000 votes. Of the over 138,000 votes Sri got, some 15 percent were Muslims because many Imams and a Muslim political action committee  came to his support. It was part of an exchange of Sri’s help to the current director of Emgage, who was running for a Sugarland City Council seat.

But they supported him mainly because they did not know the background of Sri and his unspoken relations with the Hindutva groups and leaders. They were not fully aware of the Hindutva. In 2020, Sri relies on the Emgage director and a few religious leaders and Muslim physicians to attract Muslim votes. Emgage, Houston, director, Nabila Mansoor, and a local Muslim physician, Dr. Shama Rashid, reportedly married to a relative of the well-known Muslim scholar are his psychopaths as said by many Muslims of the district. One of the voters, said that the Muslim supporters of Sri have made it a prestige and ego issue and may not change their position even if the community rejects Sri.

Sri has held a few meetings through zoom with Muslims of the district. In one such session, the community was not allowed to ask questions about more than 19 million donations that Sri has got from Hindutva fanatics. In such a meeting, those who expressed their intention to question Sri on RSS were blocked. Many who attended these meetings called them a big joke.

The Hindutva are presenting this race as part of their religious crusade in the USA. But they are aware that without Muslim support, Sri may not win the election. Hence, they have reportedly recruited Muslim individuals who ignored the Hindutva groups’ anti-Muslim and anti-Muslim policies in the US and India. These groups have reportedly accepted lynching as part of the Hinduisation of India, and they held celebration when their leader Modi inaugurated the construction of a Temple, built on the site destroyed by Hindutva terrorists in 1992.

These Muslims refuse to accept facts and through their political support, stabbing Muslim Indians and weakening the cause of the community in the country. Unfortunately, the national executive of Emgage, a Muslim PAC, is silent on this. It is time to question such Muslim groups for their support of candidates whose hidden agenda is to serve forces determined to annihilate Muslims in India.

The Muslims living in District-22 must make a distinction between facts and deception. The Hindutva forces are using deceptive tactics to get Sri elected, and if Muslims who support him do not see the truth, the community will suffer in the US as well as in India and elsewhere. The Democratic party must take note of the fact that a foreign government through its connections with Hindutva groups in the USA is interfering in the US election.

Over 2,500 signatories demand removal of Kulkarni from Biden administration for his RSS links