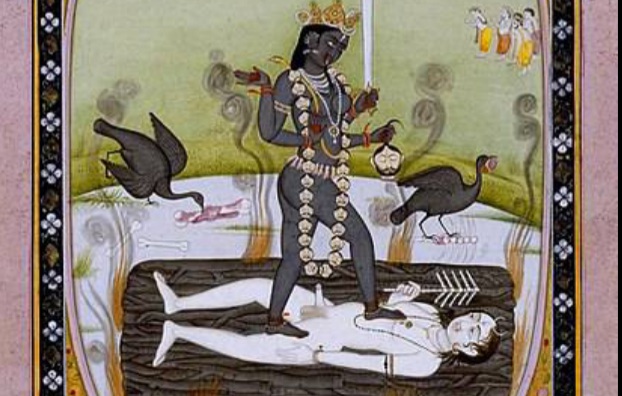 Bibek Debroy a columnist with the magazine ‘The Week’ has written a piece on ‘Who is Kaalee? The fire has seven tongues, and one of these is Kali,’ on July 24- August 4, 2022 issue.  His write-up has run into controversy because the illustrators of the magazine have put a painting of “Maa Kali” in a mating position which the votaries of Hindutva find offensive and pornographic thus hurting the religious sentiments of the Hindus. The image of “Maa Kali” is part of the collection of 67 paintings of “Kali” painted between 1800 and 1825.

This painting is a testimony of the artistic freedom customarily exercised by the artist within Hindu traditions. The Ajanta Ellora caves and Kajurao paintings are all vivid illustrations of human beings’ baser elements in the Hindu tradition.

However, the votaries of Hindutva do not accept such historical arts as pieces of visual communication but see them as “offensive” objectionable material that put Hindu deities in pornographic parlance.

The hue and cry about ‘The Week’s image was raised by OpIndia, a website that consciously raises the issue of Hindu identity and often spews fire at Indian Muslims, Kashmir, and Pakistan, the three drums that are beaten in     India to the level of breaching the sound barrier.   Interestingly the OpIndia article did carry the same “offensive” image, to make its point without any objection from any other quarters.

The website went bonkers over the painting illustrated in “The Week” magazine and sought an apology from its publisher. Simultaneously when an FIR was registered against the magazine, the publisher apologized for the human lapses. In the end, the moral police won the battle against the diverse traditions of India and added one more brick to lay the foundation of the Hindu Rashtra.

On the other hand, columnist Bibek Debroy, who is the chairman of the Economic Advisory Council to the Prime Minister, took objection to the illustration in his article, which he said was done without his permission or knowledge. Debroy repudiated that he had anything to do with the selection of the illustration and said it was done at his back without his consent or knowledge. Quickly, Debroy parted ways with ‘The Week’, magazine reasoning that it’s a breach of trust.

The observer feels that the current controversy is an assault on the Hindu traditions that have been there since time immemorial. These traditions, though loosely interconnected, are highly diverse and at the core of it is the ‘great culture’ that sits at the periphery of the ‘little culture.’ Both these cultures coexist simultaneously in a state of dynamic interactions in the Indian subcontinent.

In the interaction between little culture and great culture, the relation between the deity and the devotee is very personal and informal, often devoid of the usual reverence assigned to the semantic religious creed. In this context, caricaturing a deity of ‘Maa Kali’ is normal parlance in the field of creative art and there is nothing sacrosanct about it assigned to the believers of Abrahamic faith related to worship and reverence to the supernatural avatar.

However, in the new India, all these creative expressions are now under attack from the votaries of Hindutva. Just Buddhas of Bamiyan incurred the wrath of the Taliban in Afghanistan, the Hindutva votaries do not subscribe to the theory of diverse Hindu traditions as they do not fall in their world view of Hindi, Hindu, and Hindustan paradigms.

The Hindutva votaries in their drive to reconstruct and homogenize Hinduism on the lines of the Abrahamic religions are flattening the bends and curves of Hinduism itself. Their essential argument is; “Let the traditions go to hell, if “they” (Muslims) can enjoy the right to be offended, then why can’t “we”?

Nonetheless, the controversy arising inadvertently by ‘The Week’ magazine has put the spotlight on the Hindutva’s tone and tenure to build the Hindu Rashtra. Their readiness to launch assaults on age-old Hindu traditions in pursuance of its nefarious project is turning India from Motherland to Fatherland.  Well, welcome on board to the new India – “The Post- Truth India- The Brand New Republic.”

Syed Ali Mujtaba is a journalist based in Chennai. His forthcoming book is; The Post- Truth India- The Brand New Republic. He can be contacted at syedalimujtaba2007@gmail.com