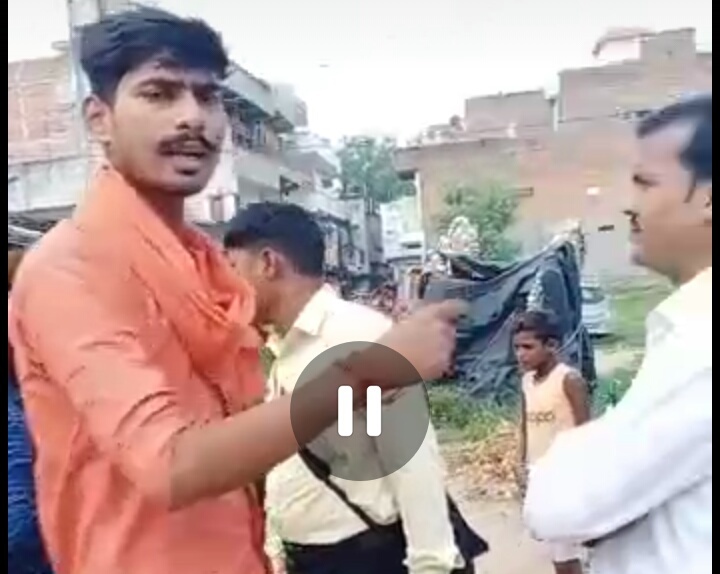 Presentation Relief says more and more ignorant youth are brainwashed and lured by the Hindutva groups to abuse Christians and make videos for recognition.

New Delhi: Persecution Relief, an inter-denominational initiative, on Wednesday alleged that the Hindutva fanatics attack and persecute Christians on the streets and make videos of it and circulate them on social media. The Christian organization particularly recorded incidents from India’s largest state Uttar Pradesh which is under the BJP rule led by a Hindu monk.

Violent attacks on the minority Christian community have been increased manifold since the Hindutva groups’ rise to ascendancy in May 2104 in the country who perceived Christian missionaries as proselytizing organisations.

Persecution Relief recorded 293 cases of Christian Persecution in the first half of this year. In 2019 alone, we recorded the maximum number of 527 cases compared to 447 cases in 2018, 440 in 2017 and 330 in 2016. From January 2016 to June 2020, Persecution Relief has recorded 2067 cases of Hate crimes against Christians in India. It is to be noted that Hindutva groups fear that India may lose its “Hindu” majority character because Dalit and other backwards class people continued to leave the Hindu fold due to its oppressive caste system and human inequality. Therefore, they target Christian missionaries accusing them of religious conversions but Christian groups vehemently denied this charge.

In this connection, ‘Persecution Relief’ presented numerous videos of Christians in which they were being persecuted by the Hindu right wing radicals. These are being widely circulated on social media, with Facebook alone having a network of 33 million users in India. It is to mention that ‘Persecution Relief’ provides comprehensive supports to the persecuted Church and Christian community in India.

Shibu Thomas, founder of Persecution Relief, said these videos are especially uploaded on groups run by the fanatics themselves and then spread to other social media platforms like twitter and WhatsApp.

According to him, “These videos aim at inciting hatred and defaming the Christian minority by making false allegations against them, mostly involving religious conversion”.

“Apart from the many obvious reasons encompassing religious nationalism, religious extremists’ groups have been targeting Christians and capturing videos of themselves accusing the Christians of religious conversion, while threatening and beating them among many other things,” Thomas said.

Most of these viral videos include a group of fanatics verbally and sometimes physically abusing the Christians, irrespective of male, female or minor. The fanatics in these visuals take great pride in what they do and appear to be liberally ‘fulfilling an obligation’ with no sense of remorse, he added.

Of late, a video has been doing the rounds of 2 Christian men being stopped by Hindutva activists on a street in Uttar Pradesh. A rather slender and tall man dressed in saffron is seen in the video with a couple of men besides him and another one taking the video.

THIS IS WHAT THE VIDEO PORTRAYS:

The fanatic rudely questions a Christian who later identifies himself as Jung Bahadur, and almost instantly begins accusing him of forcefully converting an elderly woman (who is standing beside him in a red sari) to Christianity.

The woman immediately comes to Pastor Jung Bahadur’s defence with joined hands. However, the fanatic tells her to shut up. Jung Bahadur then asks the fanatic if anyone has complained to him concerning religious conversions.

“Did these people tell you that they are poor, needy and facing many problems? And then you told them that Christianity can help them?” the fanatic replies. Jung Bahadur then tells him that he can believe what he wants.

The conversation then breaks into a series of abusive words against the Christians and disturbing threats like, “If we see you here again, we will break your legs and toss you away!” and “don’t ever come back here again otherwise you will be sorry”.

“I work with the Bajrang Dal and a leader of a local political youth group” the fanatic is heard identifying himself. Another Christian named Bacche Lal is then forced to look into the camera identify himself with his name, address and number.

After getting the information on record, the Christians are then threatened to leave with the fanatic telling them that he will “cut them to pieces and throw them away” if he ever sees them again. Before the video ends, the fanatic looks into the camera and says, “See, this is how they convert people”.

THIS IS WHAT ACTUALLY HAPPENED:

“We were invited by a Christian family to pray and inaugurate their new house. After which we had lunch and were getting ready to leave for home. As I sat on my bike, a group of fanatics approached me and took my bike keys away” said Pastor Bacche Lal, narrating the incident to Persecution Relief.

“They began threatening and accusing us of bribing people to convert to Christianity. One of the fanatics was capturing a video on his phone and the other tall man was forcing us to give them our personal information” said Pastor Jang Bahadur who was also invited to the House inauguration ceremony.

“There are 10 Christian families in that area. They have been facing persecution for a while now. However, the family that brought a new house, had a great desire to have a time of prayer and thank God for their new home” said Pastor Bacche.

Pastor Jang Bahadur told Persecution Relief that after the fanatics let them go, they began to harass the Christian families living there. “They went into their homes, seized all their Bibles and burned them, threatening them to stop all Christian activities” he added.

“The police heard about the attack and came to investigate. However, in spite of seeing the bibles burning, they did not take any action against the fanatics” said Pr. Bacche.

Pr. Jang has also expressed his fear of him and his family being attacked. “They kept calling me the entire day and threatened and verbally abused me over the phone” he told Joshua Lal, a Persecution Relief Coordinator.

Many times, what we see might not always be true. Just like the above video. The fanatics portray it in a way that spreads hate and anger. However, in this case, these Christians were invited as guests, but treated like criminals. We must be careful about what we watch and circulate on social media. An innocent person might pay dearly for our ignorance.

Last month in August 2020, a Hindu leader named Puneet, commended and praised a fanatic for persecuting a 72-year-old Christian and circulating a video of the same. He responded with a Facebook post with terms like ‘Show them no mercy’ and ‘I salute you’ to the persecutor.

Without taking the name of RSS and its affiliates, Thomas said these attacks are bound to intensify with influential leaders making hate speeches and promoting religious intolerance. More so, they encourage the persecutors by appreciating their ‘Patriotic works’ and felicitating them, he added.

“The trend is dangerously catching on. More and more ignorant youth are being brainwashed and lured by the short-lived recognition that these religious nationalists give, instead, they must discourage such visuals from being circulated”.

Because of alleged religious persecution of its minorities, Thomas said the US Commission on International Religious Freedom (USCIRF) has downgraded India to the lowest ranking, ‘Countries of Particular Concern’ (CPC) in its 2020 report.

The US State Department ranked India’s persecution severity at “Tier 2” along with Iraq and Afghanistan. Over the past seven years, India has risen from No. 31 to No. 10 on Open Doors’ World Watch List, ranking just behind Iran in persecution severity.