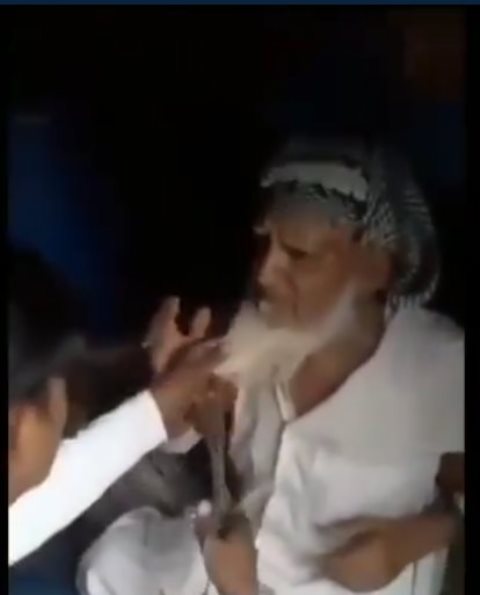 New Delhi: A 72-year-old man identified as Abdul Samad was allegedly assaulted and forced to chant ‘Jai Shri Ram’ and ‘Vande Matram’ by Hindutva terrorists in Loni in Uttar Pradesh’s Ghaziabad district. He met this fate on 5 June while on his way to a mosque to offer prayers.

According to NDTV, the terrorists allegedly abducted Abdul Samad from an autorickshaw and dragged him to a hut in a nearby forested area. They reportedly shouted ‘Jai Shri Ram‘ and ‘Vande Mataram’ and forced him to shout as well, as they punched and beat him with wooden sticks.

They reportedly also accused Mr Samad of being a Pakistani spy.

“I was on my way when I was offered a lift. Two more men then got inside (the auto rickshaw) and told me to stay. Then they took me to a room and locked me up and thrashed me. They forced me to chant slogans… they took my mobile away… they got a knife and cut my beard,” Samad said, according to NDTV.

MaktoobMedia quoted him as saying that the assailants showed him a video of  them attacking other Muslims.

The police has registered a case on the matter and arrested on person, Pravesh Gujjar. The attempts are underway to arrest other assailants.