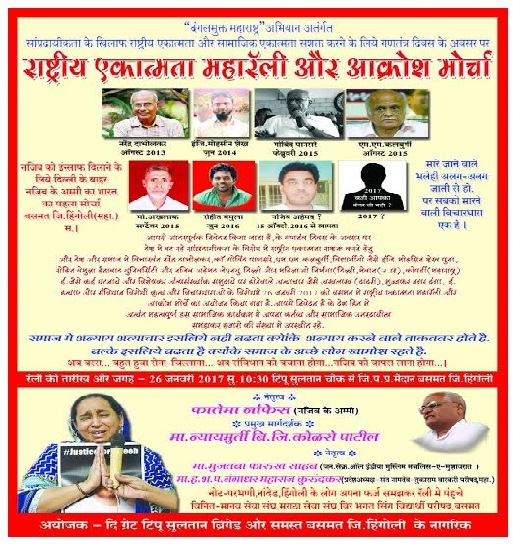 Hingoli: A massive national unity rally-‘Riot Free Maharashtra Campaign Against Communal Forces’ is scheduled to take place on 26th January 2017 at district Hingoli in Maharashtra. Organized by The Great Tipu Sultan Brigade and citizens of Basmat, the rally will be led by JNU’s missing student Najeeb Ahmed’s mother Nafees Fatima.

The purpose of the rally is promotion of communal harmony and united condemnation of organised attacks and murders of communal nature like that of engineer Mohsin Shaikh in Pune, Rohith Vemula at Hyderabad University and Najeeb Ahmed at JNU campus in Delhi by anti-national elements.

The rally will also shed light on the miserable performance of JNU administration and Delhi Police in missing Najeeb Ahmed’s case. Najeeb went missing from his hostel room on 15 Oct 2016 and since last three months Najeeb’s mother’s desperate pleas are falling on deaf ears.

The rally will be led by honourable  Justice B G Kolse Patil, Mujtaba Farooque, Gangadhar Maharaj and leaders of different religious communities shall also be present at the rally which will start at Tipu Sultan Chowk at 10 A.M and culminate in a public meeting at Zilla Parishad Ground.