Home India Historians weigh in on places of worship: Just let the past be!
Facebook
Twitter
WhatsApp
Email
Telegram 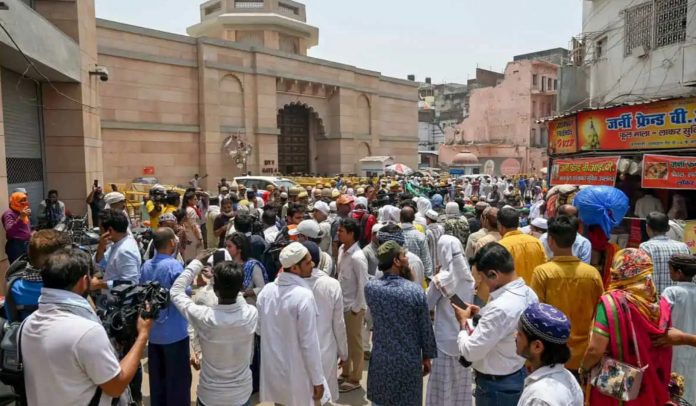 New Delhi : Be it Delhi’s Qutab Minar or Agra’s Taj Mahal, heritage monuments are lately a hot topic of debate. Mathura’s Shahi Idgah and Varanasi’s Gyanvapi mosque have already made their way to courts. But the question is — to what extent it is right to change history?

The court’s decision on Qutab Minar is expected in a few days and we will know if the temples that once stood on its premises and were demolished centuries ago, should be revived or not.

Historian and author S. Irfan Habib said, “It is absolutely not right to tamper with history. It is a politically motivated agenda and has a purpose that everyone sees. One can see that such things are being done in all the places at the same time. Voices are being raised about things which are already known to people. There is no point bringing these things in discourse.”

“Everything is being questioned, now it is the turn of Ajmer Dargah, 850-year-old history is being questioned. The Rajputs ruled Rajasthan but never said anything. No historian has written anything about it. Facts are not needed for rants, just noise is enough. For some people, it is a hate-driven fight; for politics it is a fight for votes.”

He pointed out, “The Government of India is silent on all these issues but the people raising these issues are with the government. My only advice is that it is necessary to read and understand history. If Aurangzeb did something wrong in the past and if you do the same in the 21st century, what is the difference between you and him?”

Recently, people from several Hindu organisations gathered outside Qutab Minar, raising their demand to be allowed to offer prayers inside the complex as it was built on the ruins of a temple. Qutab Minar is a soaring, 73 m high tower, built in 1193 by Qutab-ud-din Aibak immediately after the defeat of Delhi’s last Hindu kingdom. It is among the earliest monuments built by Muslim rulers in India.

Dr Tarun Kumar, Assistant Professor at Khalsa College, Delhi University, seconded that there should be no tampering with history and insisted that “Things are written on the basis of researched facts and evidence, and historians should discuss these matters further. Research should never be stopped; facts will keep coming in. This is how our knowledge grows.”

He also cautioned, “People should not form their views on the basis of social media. It is necessary to learn from the right sources to avoid any half-baked information. Our governments should have emphasised of quality education right after Independence.”

Historian Syed Ali Nadeem Rizvi said, “History is being tampered with continuously for the last 8 years, it has to be understood that history can never be good or bad. Whatever happened in the past cannot be denied. History is not written or read without proof and there is a story behind history.”

“Myth is being propagated and it is insisted that history be taught in a certain way, which is wrong. What happened in the past can be best explained by historians but no body asks them. This is a worrisome situation to make a mockery of history,” he said.

“We have to accept our history, we can’t rectify past mistakes. We are playing with the future by changing history. Countries that used to take us seriously are taking us lightly because of this.”

Several claims are being made on the Gyanvapi mosque which is adjacent to Kashi Vishwanath temple in Varanasi. It is claimed that Aurangzeb demolished the temple of Lord Vishweshwar and built a mosque over it. Recently, a Shivling in the Wazu Khana of the mosque has been found and the matter is being heard in the court.

Historian Firdous Anwar asserted, “Some people have vested interest for a particular purpose. Efforts to rewrite history have been made repeatedly but history is based on facts, not emotion; and such an account cannot be accepted on big platforms. All historians should come together and present their view.”

“Political parties should not interfere in history. If there is any issue, then they should talk to historians. I don’t recall a time when there was an attempt to tamper with history on such a large scale,” he added.

Added to the list of disputes is the demand for opening 22 rooms in the basement of Taj Mahal. This demand has also reached the doors of the court. The court petition claims that there is evidence which can prove that there was previously a Shiva temple there.— IANS

Places of Worship Act: SC gives further extension to Centre for its response