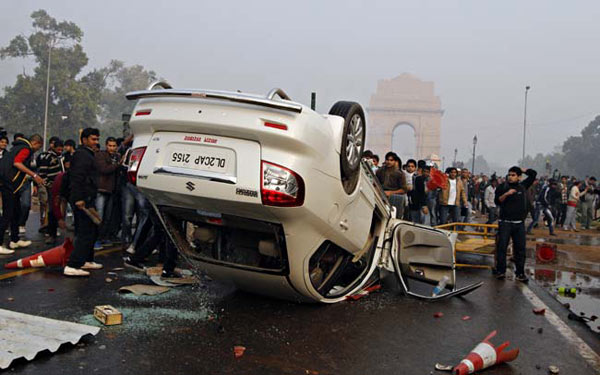 New Delhi: Civil groups have condemned both the hooligans for disrupting the peaceful movement for the rights of women and the Delhi Police for unnecessary use of power against the peaceful protestors at India Gate on Sunday.

“The legitimate struggle to make society safer for women and to prosecute the rapist in the fast track court by the concerned citizens was today hijacked by some infiltrators who had derailed the peaceful protest by turning it violent. The agitation turned violent towards the evening and appeared to have been taken over by the infiltrated hooligans. A car was overturned and wooden seating planks laid out for the Republic Day parade were set afire by the infiltrators which is a condemn-able act. A constable Subhash Tomar was also injured with other Police officials,” said civil groups in a joint statement Sunday night.

The groups also condemned police action against the peaceful protestors in the evening at India Gate.

“…Delhi Police used tear gas and water cannons to disperse the protestors who were protesting peacefully by sitting near the India Gate. The Delhi Police also lathi charged on the protestors who included old aged and women. Many protesters and Media person where also injured. The Police had resorted to these acts even before these incidents of violence,” the statement said.

For last two days hundreds of people are protesting against the gang-rape of a 23-year-old medical student last week and demanding capital punishment to the culprits.

The civil groups have demanded the government:

To order an inquiry against the irresponsible policemen

Signatories to the statement are: