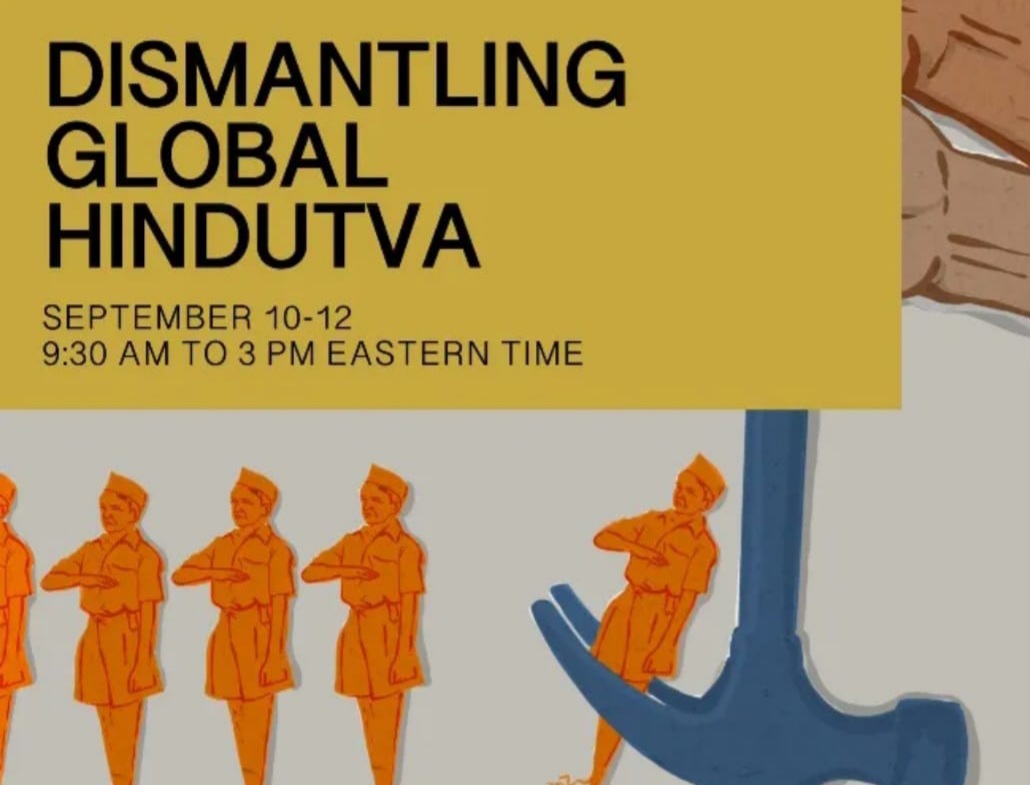 When the Dismantling Global Hindutva (DGH) conference was announced sometime in Aug (the conference was held Sep 10-12), it featured on its flyer the imagery of what were unmistakably RSS figures in profile being yanked out by a hammer. One could read this image as signifying the rooting out of the insidious effect of Hindutva from its base – the act of “dismantling Hindutva” that the conference aimed for.

Ordinarily, online conferences of this nature, even with the most ambitious titles, are mostly academic in nature and elicit a tepid response. They have a usual cast of characters and the narratives are predictable. So they rarely make a splash beyond their immediate target audience.

But something about this conference title, the imagery and the fact that it claimed that several top universities in the US were sponsoring it set off a firestorm among the Hindu right-wing organizations, especially in the US. Soon, every TV and youtube channel worth its nationalistic salt was covering the news of the conference as if the very existence of Hinduism depended on it.

Organizations like the Hindu American Foundation (HAF) and the Coalition of Hindus of North America (CoHNA), which claim to represent the Hindu interests in North America, swung into action.

They employed principally two strategies to sensationalize their responses.

First, at a broad level, they conflated Hindutva with Hinduism, ignoring the clarifications already in the conference details. They began to spread rumors that the conference was designed to malign Hinduism. In this vein, they also raised a false alarm about a supposed Hindu-animosity at work, which they label Hindu-dvesha or Hindu-phobia.

And second, even while crying wolf about Hinduphobia, as a shockingly shameless counter-strategy, they indulged in Islamophobia.

This they did in the usual manner, by pointing to the liberals like the conference organizers not addressing issues of “Islamic terrorism.” They alleged that the conference organizers had falsely decided to malign Hinduism to take attention away from goings-on in Afghanistan and the takeover by Taliban. In their opinion, the recent events in Afghanistan demonstrated that Islamic terrorism had manifested itself again and needed urgent attention.

What followed from this point on was a lot of frenzied action to try to convince anyone who was willing to listen that a conspiracy to undermine and tar Hinduism was underway. Nevermind that several participants in the conference were Hindus by birth and the organizers had explained that their attempt was to take on the threat of a kind of ultra-nationalistic Hinduism (“Hindutva”) that was exclusionary and bigoted.

The conference opposers dug up anything in the conference speakers’ past they could lay their hands on to show that they had been insulting towards Hinduism. They even proceeded to threaten the families of the participants with dire consequences.

The diasporic organizations leading the charge, like HAF and CoHNA,  began to bombard US universities and departments with emails and phone-calls, asking them to withdraw any support that the institution might have indicated. They also tried to enlist the support of as many organizations in the US – several temples among them – to rally for the Hindu cause.

And, in other imitative attempts at hitting back at the organizers, an organization sympathetic to the opposers’ reasoning even announced a “counter-conference,” titled “Dismantling Global Islamic Communist Jihad,” with Delhi-riots-accused Kapil Mishra as one of the participants.

It is quite obvious that somewhere the Sangh Parivar and its supporters used this occasion to vent their frustration towards all those who have been speaking out against their bullying tactics. Academics and academic institutions who have dared put forward a narrative that does not agree entirely with the sanitised version of history and religion that the Parivar wants have faced relentless attacks.

Recently, Delhi University removed certain authors’ works from their undergraduate reading syllabus. In the US, an historian called Audrey Truschke of Rutgers University has been the target of particularly vicious attacks from the Hindu Right for allegedly having hurt Hindu sentiments by her works. A Sanskrit scholar was recently forced off an online list for the crime of having authored books with Romila Thapar and R.S. Sharma, and for having spoken against the Right’s stance during a controversy involving school textbooks in California, USA.

Truschke has been particularly unbowed by all the criticism leveled against her. She is part of the South Asia Scholar Activist Collective which released the Hindutva Harassment Field Guide a few months ago. The Collective lent its full support to the DGH conference and that did not endear Truschke to the Hindu Right any more.

The vicious reaction of the Hindu right to the conference points to a fact that many have known for a long time now: the active participation of the Hindu diaspora in Hindu advocacy in particular and the Hindu cause, more generally. The digital world of social media has just made the effect more seamless, with programs based in the diaspora, chiefly the US, and in India feeding off of each other.

But before this digital buildup, there has been a fairly deep recent history of the diaspora taking up the Hindu Right’s cause, either through official institutions like the Vishwa Hindu Parishad of America (VHPA), Overseas Friends of the BJP, or through several other trusts, foundations and other “service-oriented” organizations.

Added to this has been an aggressive confrontation with US-based academics, long before the current confrontation with Truschke. They have been accused of hurting Indian sentiments through their writings or supporting theories such as the Aryan Migration Theory, something that nativists among the Hindu Right detest.

The opposition to the DGH conference brought together the fury of all these different strands of supporters of the Hindu cause, past and present. For an academic conference which took aim at the toxic effects of a belligerent nationalism, with no concrete action planned, the ire of an entire army of opposers came down upon it, with the opposers baying for the blood of the organizers and panelists.

In some ways, one got a glimpse of the mobilization of a lynch mob, a reality that India has seen in horrifying details in recent years. For the Hindu Right that makes fun of the notion of “tolerance,” it was no surprise to see the demonstration yet again of vicious intolerance on its part. The intolerance and virtual lynch mentality were similar to the mindset behind the on-ground lynching one has encountered in India. They was based on “fake news” and rumors about transgressions against the Hindu religion, they easily constructed the image of the ‘Other’ – the Muslims and some communists thrown in this time, and the only solution in this case was a complete cessation of what was irritating them – a life, in actual lynching cases, a conference on this virtual occassion.
***

Aviral Anand is a freelance writer based in Delhi