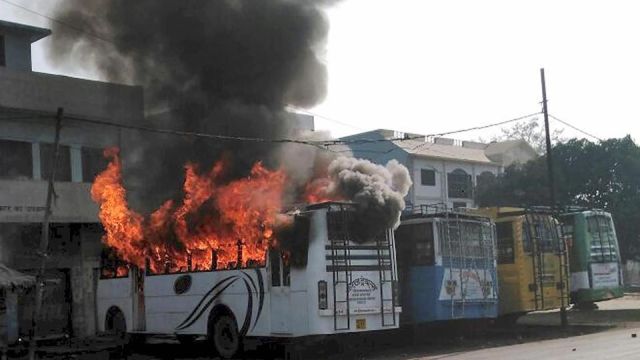 Just as Kasganj in Uttar Pradesh is trying to recover from last week’s deadly communal clashes, the Rashtriya Swayamsevak Sangh may be adding fuel to the fire.

The RSS is organising rallies in different cities and towns across the state, mostly between February 18 and 25 although a few will be held in March as well. The rallies are meant as a “show of strength” and will see uniformed cadres of the RSS and its affiliates in the Sangh Parivar marching with sticks.

In at least three cities – Varanasi, Agra and Meerut – the rallies will be addressed by the RSS chief Mohan Bhagwat. Senior RSS officials said cadres from four of its six prants, or organisational divisions, in Uttar Pradesh were being mobilised for the “show of strength” in Varanasi, scheduled for February 18. The four prants are Kasi, Kanpur, Goraksha and Awadh. Cadres from the other two prants – Braj and Meerut – will conduct similar programmes in Agra and Meerut on February 24 and 25, respectively. In smaller towns, especially in western Uttar Pradesh, the Sangh Parivar supporters will hold “localised road marches and rallies”, the RSS officials said.

Although RSS officials are calling it an “apolitical exercise”, it seems to be aimed at mobilising the Sangh Parivar rank and file for the next Lok Sabha election.

The massive exercise could further polarise a state where communal tension runs deep, ready to erupt at the slightest provocation as happened in Kasganj. Communal violence and electoral politics in Uttar Pradesh have been closely linked at least since Hindutva extremists mobilised by the Sangh Parivar pulled down the Babri Masjid in Ayodhya in 1992. For the most part, the communalisation of politics has benefited the Bharatiya Janata Party, the political affiliate of the Sangh. The communal polarisation effected through the Muzaffarnagar carnage of 2013 is believed to have been crucial to the BJP’s spectacular electoral success in the state – the party took 71 of the state’s 80 seats in the 2014 Lok Sabha election and swept the Assembly election in 2016.