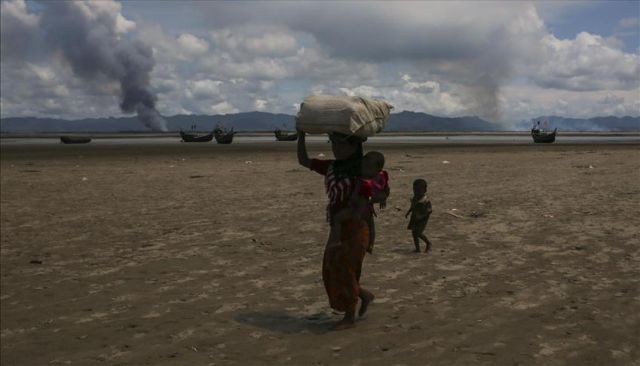 “The level of destruction, which you can see from the air, hundreds of villages which have been completely destroyed,” Bob Rae told CTV News.

“I continue to be struck by the level of deep hostility to the Rohingya. The degree of that hostility is the underlying problem.”

Rae and other foreigners were allowed to do the air tour because Myanmar is attempting to demonstrate that it is ready to take back hundreds of thousands of Rohingya who fled to neighboring Bangladesh because of persecution.

The Myanmar military has been accused of ethnic cleansing of the minority Muslim Rohingya in the predominately Buddhist country.

In January, Myanmar and Bangladesh signed a deal that would see about 700,000 Rohingya refugees return to Northern Rakhine State over a two-year period.

But the United Nations High Commissioner for Refugees said this week that time is running out as a major emergency looms, with the monsoon season soon to begin and more than 107,000 Rohingya living in areas prone to flooding and landslides.

“The (Bangladesh) government is steering a massive emergency preparedness effort, but international support must be stepped up to avert a catastrophe,” Filippo Grandi told the UN Security Council.

Rae said moving so many refugees back to Northern Rakhine State is rife with difficulties.

“The problem is the enormity and size and scope of the number of people who have to be admitted,” he said. “And what will be the conditions in terms of their safety and security when they come back?”

Rae added that there is another problem that has basically escaped international attention – the proliferation of a heavily armed guerrilla group of the Arakan Nationalist Buddhist movement that is rebelling inside Myanmar.

“That army has inflicted quite a lot of damage on the Myanmar army,” Rae said. “They will form a body of serious resistance to the return of the Rohingya to the northern parts of Rakhine, in which they live.”

More than 650,000 refugees, mostly children and women, have fled Myanmar since Aug. 25, 2017 when Myanmar forces launched a crackdown on the minority Muslim community, according to the UN.

In a report published on Dec. 12, 2017, the global humanitarian organization said the deaths of 71.7 percent or 6,700 Rohingya were caused by violence. They include 730 children below the age of 5.

The UN has documented mass gang rapes, killings — including of infants and young children — brutal beatings and disappearances committed by security personnel. In a report, UN investigators said such violations may have constituted crimes against humanity.