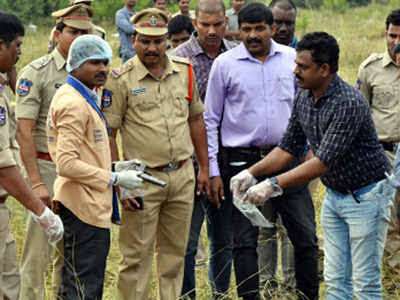 Hyderabad: A fact-finding team of the National Human Rights Commission (NHRC) on Saturday completed first day of its probe into the killing of all the four accused in the woman veterinarian”s gangrape and murder case by the police in an alleged “encounter” early Friday.

The team visited four different places, including the scene of the encounter at Chatanpally near Shadnagar town.

The team, comprising seven NHRC officials, began the visit from Mahabubnagar town, where they examined the bodies of the slain accused preserved in the government-run hospital.

The team examined the bullet injuries on the bodies and also spoke to forensic experts who conducted the autopsies. The hospital authorities also showed to the team the videos of the autopsies conducted late on Friday.

The investigating officials of the human rights body also gathered other details from the administration.

They later recoded the statements of the families of the four deceased.

The team then left for Chatanpally near Shadnagar town where the police gunned down the accused in the alleged exchange of fire. The team members examined the scene of the encounter and gathered details from the officials of Cyberabad Police.

The panel also went to the nearby bridge under which the accused had set afire the victim”s body.

The team then drove to Tondupally toll plaza on Outer Ring Road (ORR) where the accused had kidnapped the victim and committed the gang-rape.

The team members spoke to Deputy Commissioner of Police Prakash Reddy and other officials and gathered details of the incident.

The investigation is likely to continue on Sunday.

The NHRC on Friday took cognizance of the incident and ordered an inquiry. The human rights body said the encounter was a matter of concern and needed to be probed carefully.

The human rights body also felt that the police personnel were not properly alert and prepared for any untoward activity by the accused on the spot, which resulted in death of all the four persons.

“The deceased had been arrested by the police during investigation and a judgment in the matter by the competent court was yet to be pronounced. If the arrested persons were actually guilty, they were to be punished as per the law pursuant to the directions of the competent court,” the NHRC said.

Meanwhile, a case in connection with Friday”s exchange of fire was registered at Shadnagar police station.

The police booked the case on a complaint by Assistant Commissioner of Police Surender Rao, who was the investigating officer in the gangrape and murder case.

The police with the help of bomb disposal squad gathered more clues from the scene. With metal detectors, the police personnel scanned the field to trace the bullets which may be lying there.

The police claimed that the accused attacked the police personnel and two of them even snatched weapons and opened fire, forcing the police to retaliate. Cyberabad Police Commissioner V.C. Sajjanar said that all the four died in retaliatory fire. Two policemen were also injured, but these were not bullet injuries.

The incident occurred early Friday when the police team had taken the accused to recover the victim”s mobile phone and a watch which they had hidden near the place where they set afire the woman”s body on the intervening night of September 27 and 28.

The accused had gangraped and killed the veterinarian near the outer Ring Road at Shamshabad on the outskirts of Hyderabad and dumped the body and set it afire near Shadnagar.

On September 29, the police arrested two truck drivers and two cleaners in connection with the case. The next day they were sent to judicial custody while the police took custody of the accused on December 3 for interrogation.