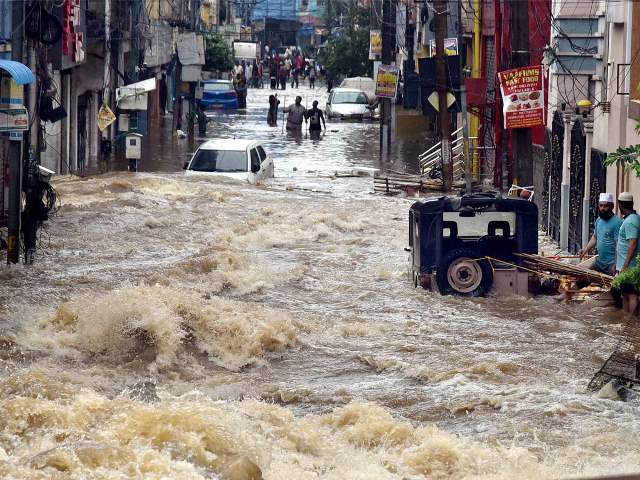 The city and outskirts of Hyderabad saw a catastrophe in October 2020 in the form of floods-related natural calamity.    With incessant rains while the city drenched, the surrounding numerous lakes received huge inflow resulting into its overflow.   It was found that the former planners of the city had  connected all these lakes with canals to smoothly transfer excess water in the nearby larger lake.  Later upon and finally the excess water had to flow down into the Moosi river. This time, a few days excess rain-water resulted into a big calamity for the citizens.  While many roads, streets were flooded, inhabitants of some colonies saw huge water explosively attacking their dwellings through eruption of man-holes right in the by-lanes, house-compounds, garages and emptying their houses of their cars, autos, two-wheelers, household belongings.

Those who closely monitored the situation observed time that some of the recently developed clusters of colonies and extensions were actually built in and around the city were either in illegally occupied lands or government approved lay-outs sanctioned plots of land.   In the absence of a clear map, picture of the Plan and its historical importance even the Town Planning Department of the State Government had failed in its duty and sanctioned these lay-outs which came up in the passage of the rain/drain water in a very large quantity.   Having no alternative passage made available, the avoidable has happened and cause irreparable damage to the inhabitants. More than three months have passed and occupants of some of the colonies (the Osman Nagar to be specific) are yet to return to their houses.  Lack of coordination, interest and Inaction on the part of local elected representatives, Municipal and State officials are squarely responsible for this situation. The present TRS government has earned a name of making promises and promises which are seldom put into practice. KCR garu and KTR garu should note that the public cannot be further put to test any more.   They should know that the B.J.P has drawn up a plan everywhere upon opportunity to and finally remove your party from power in the state.   The common man now is disappointed totally from the callous behavior of officials and your party cadre.

A SUGGESTION FOR PERMANENT RELIEF:The owners of houses and buildings built on lay-outs duly approved illegally by the developers, builders with the connivance of staff should be compensated by the government and expenses to be partly charged to the developer/builder who profited out of the venture.   While a part amount can be shared by the occupant and government, the officials responsible should be asked for their explanation for dereliction of duty.   That will be a deterrent for these elements but for whose active connivance this calamity could have be avoided.   Definitely it is the duty of the government to take an initiative and bell the cat.