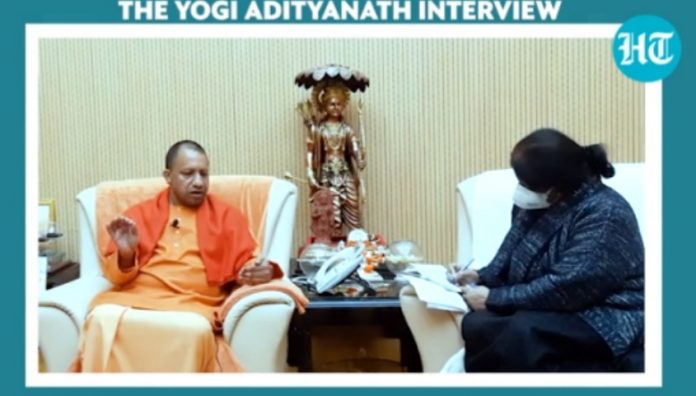 As if the public disgrace of UP BJP Deputy CM Dinesh Sharma (Brahmin) was not enough, that within a week UP BJP CM Ajay Singh Bisht alias Yogi Adityanath (Thakur), has openly claimed that he is never hurt to do politics in the name of Rajput/Thakur in an interview to The Hindustan Times on January 27. The bitterness between the two Upper Caste Hindu factions, which has been for centuries, therefore, is not be subdued, when even if, both are united in the name of subverting the Dalits and Backwards ( Lower Hindu Castes) after attaining the reins of power. For Muslims too it is the unanimous policy!

On being asked, ‘You talk about Hindu consolidation but people accuse you of being casteist, and of favouring Rajputs? Yogi Adityanath deserves to be quoted verbatim as he nodded into confirming it, “I am not hurt . It is not a crime to be born in a Rajput family. This is one caste in the country in which even God was born, not once but many times. One should take pride in one’s caste, and I am proud to be a Rajput, ” came his reply, before he added the jargon that many non-Rajputs got homes, toilets and grains from the government etc. Thus, he made it clear, that Yogi Adityanath has always stood as a face of Thakur hegemony. This attitude emanates more specifically, from inside Brahmins, who otherwise are the ruling-class of the nation and are considered as the prime ‘movers-and-shakers ’ of the establishment in India. It also speaks of hollowness of the parroted theme Sabka Saath/Sabka Vikas (With all/development to all) singled out by BJP since the past five-years.

It would surely need a separate book to find out as to how Yogi Adityanath led BJP government perpetrated atrocities and exploitation on Dalits/Backwards/Brahmin etc which ultimately led to the exodus of the Backward leaders like OP Rajbhar, Swami Prasad Maurya, Dharam Singh Saini, Dara Singh Chauhan etc along with many other, so as to come out of the suffocation they must have felt inside BJP. There was hardly any noticeable Backwards/Dalits getting into any employment as the farce of the 69,000 teachers appointments scam prove, despite the fact that UP BJP State President is Swatantra Dev Patel ( Kurmi) and even BJP PM Narendra Modi is a Backward.

It will be interesting to find that the Backward Jats too had way back abandoned BJP, as Jats are a mostly agriculture based community, and who were aggressively involved in the protests against the three anti-farmers laws framed by BJP, which later BJP had to roll-back, thus, leaves BJP with only one option- to bank on Rajputs! As Brahmins are now vocally against the complete monopoly of Thakurs in the whole government apparatus.

What is therefore Yogi Adityanath ought to do? Except to harp upon the communal canard, against Muslims, as the only available option to stake claim to government, and with it, to only perpetuate the stranglehold of Thakurs. On Jan29, on his tweet, he compared the making of Hajj House in Ghaziabad (by Samajwadi Party ) to the making of his government Kailash Mansarovar Bhawan. He could have easily done it alone but to drag Hajj House is the only BJP available rhetoric, in order to yet again polorise the elections on religious lines.

The strategy is to play the communal card and even ferment communal riots, in the already surcharged political atmosphere, to isolate Muslims and thereby reap the harvest for Hindus, but for Hindus who were conned by BJP slogans in 2017, the possibilities for ‘such a situation’ seem to be absolutely bleak if not even remotely possible. In fact such has been the ‘impairment’ of Hindus, that from the very place of Lord Rama i.e. Ayodhya, Yogi Adityanath had to drop the idea of fighting elections and was forced to recede back to his home town-Gorakhpur.

UP for sure waits for the list of the Thakur mafias who were thrown to jail, their illegal properties seized or demolished or even those Thakur officers who were censured, suspended or terminated, and in fact, otherwise promoted? On the other side government agencies were always-ready with bulldozers to demolish and ransack any such property owned by a Muslim! When such one-eyed-approach oriented CM becomes the head of the state, imagine how around 24 Crore citizens must have had the raw-deal in the last five years. Forget the millions of dead-bodies which were buried on river beds or floated in the rivers during the second wave of COVID-19 for the want of oxygen, and that if anyone was to ‘say-so’ was to be invoked with a National

How Dalit Samaj people, who have been trampled for centuries, must have been subjected to such extreme bias, had got surfaced on Jan 27, when Swatantra Dev Patel was forced-out of a Dalit village, in Khatauli constituency in Muzaffarnagar, as Dalits protested to BJP ‘to not seek their votes’. The hype of ‘development for all’ had long been consigned to the dark for Dalits as the BJP MLA Vikram Singh Saini never visited the constituency. It is also time to recollect the rape-and-murder of the Dalit girl in Hathras, which Dalits are not to forget, despite efforts of BJP to put forward the Hindi-Muslim religious binary. The cold-blooded murders of Vivek Tiwari in Lucknow, Manish Gupta in Gorakhpur and the murder of Sikh farmers ( which had Hindus too) in Lakhimpur, all speak of the atrocious Yogi Adityanath government attitude as all involved UP police. Will the Hindus forget it? While no one is interested to speak about the 22 dead Muslims in the wake of anti CAA/NRC/NPR protests!
BJP despite all seems undeterred to play the Thakur card and does not shies from it on any occasion. This has obviously forced the partners of BJP to come out of their alliance as it had dawned on them that BJP government has always been Thakur/ Rajput centric. The Kushwahas, Mauryas, Jats, Rajbhars find themselves ‘cheated’ apart from Yadavs, Brahmins and Muslims- who make a chunk of about 20% of voters-are all united and determined against the BJP government, along with Brahmins.

The report card will arrive on March 10, as the general mood of UP is against BJP despite its effort to forge a communal agenda yet again.

Battle for UP: Owaisi brings hijab row to UP polls