Aligarh: I want to repeat the ‘Kerala Model of Muslim Empowerment’ in Uttar Pradesh. The empowerment of Muslims in UP will change the condition of Muslims in the entire country, said  Ameer Ahamed the managing trustee of Manappat Foundation.

Vision 2040 Project is an endeavor of Manappat Foundation, a Corporate Social Responsibility wing of Manappat Group.

He also gave an inspiring account of his journey so far. He acknowledged the efforts of the team members, donors and supporters. “For the  change in society we need a paradigm shift ” he emphasized. He further appealed the audience to volunteer for the noble work being carried out by Vision 2040. Also, he hoped that through his project he will be able to establish a network and create synergy among various NGOs working for minorities in U.P.

Hailing from Kerala , Mr Ameer Ahamed, an AMU alumnus stated the project in 2015 to achieve significant advancement in the educational, economic and social status of the marginalized communities of Uttar Pradesh. 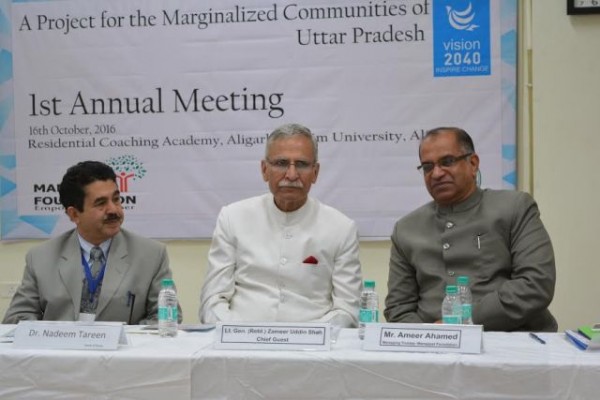 The aim of the meeting was the assessment of annual progress on current projects of Vision 2040 and deliberations on prospects of future projects. It served as a platform to acknowledge the contribution and support of well wishers of Vision 2040 project. Notable personals of AMU and scores of concerned persons attended the meeting.

The Chief Guest of the Annual Meeting, Lt. Gen. (retd.) Zameer Uddin Shah, V.C of AMU emphasized on the importance of school education for Muslims. He referred schools as the foundation of one’s character which should be further strengthened.“Our aim is to open Sir Syed National School in every district,” said V.C.

The Guest of Honor Dr. Nadeem Tarin, President of Nadeem Tarin Educational society highlighted the scope of work required to be done in small towns, villages and remote areas. He promised full help and support to Vision 2040 team in Sambhal for education, employment and health related initiatives.