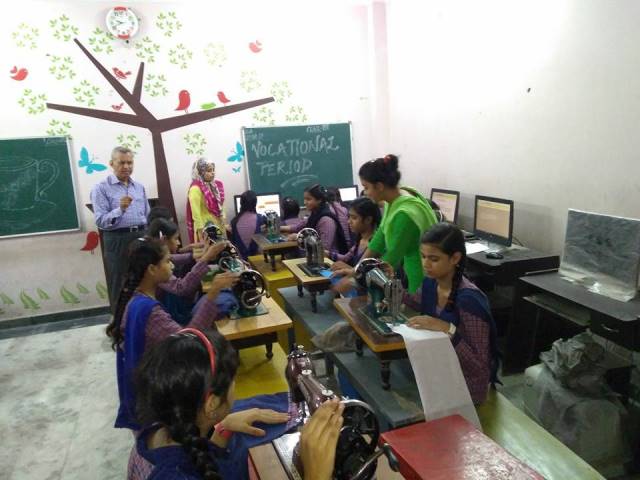 Iftikhar Ali Khan, a chemistry teacher at Faiz-e-Aam College in Meerut, is persistently paying efforts to carve the future of girls with extremely humble background such as the daughter of rag pickers and beggars. His vision is to uplift these girls and ensure a bright future.

Khan strongly believes that only education can shape the destiny of the unprivileged. To pursue his vision, he set up a school in 2012 at his barely constructed house. Later, he borrowed Rs 45 lakh from a bank for construction of a separate building and other formalities to get it registered.

At present, the academy has 3 floors with basic amenities, including the computer lab and sewing machines for vocational courses. Along with other subjects, the school offers the vocational courses such as beautician, sewing and diploma programmes.

Of the 200 girls enrolled there, around 100 are orphans. He does not charge any fee. They are provided free uniforms, books and food free of cost.

The students there are guided by five female teachers so interaction between them can be comfortable. The institution is named as ‘Effort Academy: Vocational Training Centre’.

Khan aims to provide a good professional and English education to these unprivileged girls, so that they can survive and autonomously earn bread. He concentrates on imbibed moral values of their lives.

He spends his monthly salary to repay the loan and other expense of the school. He is the single man (unmarried) and considers their student as daughters. He aimed to secure their future as much he can. At present, around 3,000 students get education free of cost in his school.

“I always aimed to make some change in the life of the unprivileged people. I have seen many girls begging on roads and work as the rag pickers. This is an irony that we barely work for any change in the society. As a teacher, it is my responsibility to dedicate the life to the society. In 2012, I decided to open an academy for such unprivileged girls so that they can live respectfully. Despite any communal or social difference, girls get the education here,” Khan told MuslimMirror.

He said, initially, locals were opposed to the idea of establishing the school. They created many hindrances. They were resisting the idea of educating poor girls in the posh locality.

Another challenge he faced was convincing the parents of the girls. “They were not ready to send their daughters for any academic purpose as they help them earn bread through different means. After a lot of efforts, I somehow got success in convincing them,” he said adding that “he never asked for any assistance from outsiders”.

“I spent  from my pocket as I want to see them successful in their lives. I never married, but consider all of them as my own daughters. Right now, I am happy that at least they are getting the education as other children. We provide them food, mineral water, books and uniform and I have a dream to establish a boarding school for them so that they can spend their whole day in the school,” he added.