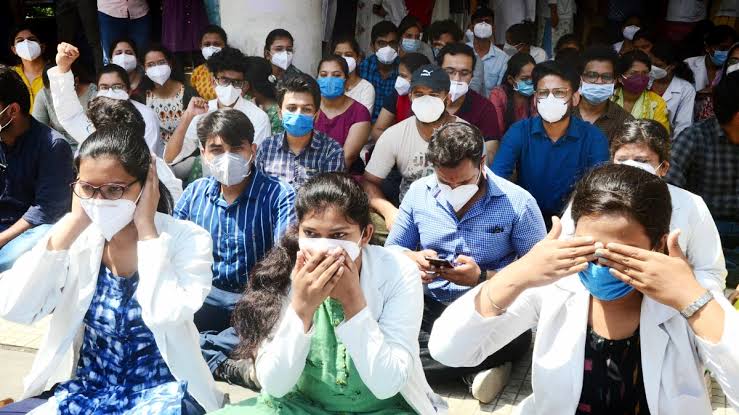 The medical council expressed anguish over continuing attempts of certain people to propagate disbelief and misinformation in relation to the vaccines and the evidence based scientific protocols of modern medicine released from time to time by the Ministry of Heath along with the guidance of ICMR and the Covid-19 Task Force.

Raising increasing incidents of physical violence against the doctors and the health care professionals, the IMA said the brutal assault on a young doctor in Assam and the assault on lady doctors and even on veteran practitioners across the country are causing mental trauma among the practitioners.

It said that many young doctors have also lost their lives on account of their dedicated service to thousands of people — which has affected not only the Doctors but also many of their close family members, it said.

There are cases where both husband and wife being doctors have lost their lives, leaving behind their children as orphans.

With the continuous and ongoing physical and mental assault on our doctors as well as purposeful spread of misinformation against modern medicine and vaccination by certain people with vested interests, the IMA said, it is “constrained to once again appeal to you (the Prime Minister) to personally intervene and resolve our long pending pleas”.

The IMA noted that the entire medical fraternity has been battling at the frontlines in the war against Covid-19 and has been able to save millions of people, and also lost lives of 1,400 of its “proactive veterans and dynamic younger ones in this war against the pandemic”.

The IMA appealed to the Prime Minister to book and punish in accordance with the law persons who spread misinformation against the vaccination drive which is meant to fight the Covid-19 pandemic.

“All such acts of omission and commission on behalf of any person raising doubts in the minds of the common public against the protocol guidance issued by Ministry of Health for treatment of Covid-19 infected patients ought to be suitable punished and simultaneously, any attempt of any person to fool the gullible public and promote so-called “magic remedies” or “wonder drugs” without the approval of the Ministry of Health ought to be immediately curtailed.”

The Health Services Personnel and Clinical Establishments (Prohibition of Violence and Damage to Property) BilI, 2019, which seeks to punish people who assault on-duty doctors and other healthcare professionals by imposing a jail term of up to 10 years which, apparently, was dismissed by the Home Ministry during an inter-ministerial consultation over the draft law, ought to be promulgated immediately along with the incorporation of provisions from the IPC/ CrPC and with stipulations for a fixed time schedule for speedy conclusion of trials.

All those involved in such heinous crimes ought to be punished so as to also create an effective deterrent for other anti-social elements who may indulge in attacking any Health care professionals.

The doctors who have lost their lives in the war against the Covid-19 pandemic ought to be recognised as Covid martyrs with due acknowledgment of their sacrifice and their families ought to be duly supported by the government.

The IMA thanked Modi for the Pradhan Mantri Garib Kalyan Yojana scheme under which insurance benefits are being extended to such families but mentioned that there are various obstacles in the procedural implementation of the scheme. “Out of 754 doctors who had lost their lives in the first wave, families of only 168 doctors have been able to apply under this scheme.”

The IMA also requested the Prime Minister to create an effective mechanism for identifying and verifying all these victims. — IANS