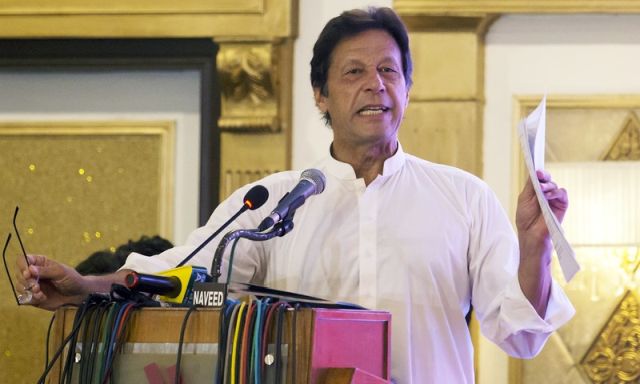 Islamabad : Pakistan Tehreek-e-Insaf Chairman and cricketer-turned-politician Imran Khan on Monday unveiled his party’s manifesto for the general elections, announcing that he would turn the country into a welfare state if voted to power.

Titled “Road to Naya Pakistan”, the manifesto’s primary point is to turn the country into an Islamic welfare state, a model the principles of which are followed in the Scandinavian countries, Khan was quoted as saying by Dawn online.

He said his party would safeguard national security and defeat the terrorists’ narrative, human resources, finances and weaponry to tackle the internal threats the country faces. In order to curb the proliferation of arms and ammunition at international level, the PTI government would also invite India for strategic discussions, Khan said.

Talking about the issue of corruption, he said: “We will make the National Accountability Bureau (anti-graft body) autonomous and pursue all cases of corruption,” Khan said, adding that “we will empower the people and devolve the power to the village level”.

“We will introduce a non-political model of policing like the one in Khyber Pakhtunkhwa to the rest of the provinces as well. And to ensure that Pakistanis get instant and quality justice, we will introduce comprehensive judicial reforms.”

Khan outlined the major issues of all the regions and vowed to resolve them. The PTI chief further said his party would boost the economy by creating 10 million jobs and promoting small-to-mid-level industries.

“We will make Pakistan business-friendly and turn the China-Pakistan Economic Corridor into a game-changer by enhancing bilateral relations.”

The manifesto, he said, also has plans for introducing educational reforms in schools, religious seminaries and vocational centres.