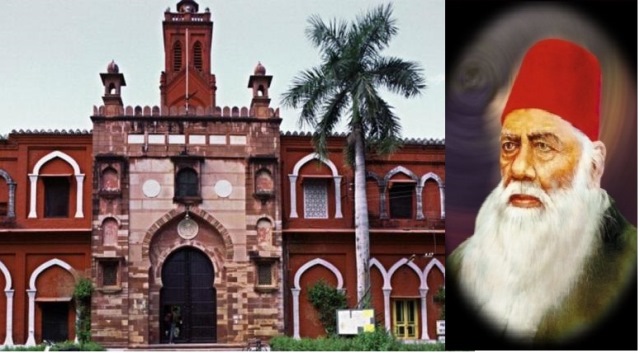 The single most dangerous preposition of fascists is persistence. Persistence with brutality and hate form the lynchpin of their efforts to control the masses. The disproportionate logic of hate cannot work unless it is hammered day in and day out like the blows of an ironsmith shaping a hot iron rod into an ugly sabre. Unfortunately in this new India, in last four and half years disproportionate logic of hate has been flowing unabated through the screens of our TVs and the pages of our newspapers. The sabre has been in the making.

The alleged mishandling of the staff of a so called ‘nationalist’ TV channel in the Aligarh Muslim University (AMU) campus and subsequent booking of 14 students on charges of sedition, is a classic example of this persistent brutality. We are told by hyperventilating TV anchors that AMU is a hub of terrorists and anti-nationals. Haven’t we heard this before? The modus operandi is too simple and too comprehensible than when it was used nefariously for the first time on the campus of the Jawaharlal Nehru University (JNU) in the spring of 2016. The intent to create mischief at the AMU campus is not a new fable. In the last four and a half years there have been multiple attempts at maligning the university through vile campaigns. Whether it be the photograph of Jinnah (decorating a wall in the students’ union hall) or the absolutely baseless news of non-availability of food to non-Muslim students during the month of Ramzan, AMU has been at the heart of the most potent anti-minority campaign seen in post Independent India.

Being an alumnus of the Aligarh Muslim University, I am privy to the life on the campus, and hence feel it appropriate to make a few points. To begin, by no stretch of imagination can the AMU campus be considered to be a heaven of liberal thought or free will. No, it isn’t a JNU. Having said this, it is also not a madarsa training its students in the tenants of Islam. The AMU is as liberal or as radical, as patriarchal or as feminist, as conservative or as modern as any other university of the country. A quick glance on available data reveals that the representation of women teachers, proportion of female students, the number of research papers published, student placements, notable alumni and other such parameters of educational achievement in AMU are either same or better than a large number of other central or state universities. Some of you might point out that I have left out the ‘number of Muslim students enrolled’ at AMU, as a measure of its so called obscurantist thought. Yes, a rough estimate tells that around sixty to sixty five percent students enrolled in AMU are Muslims. Should that not be a reason enough to worry in a nation, the present political dispensation of which is imagining to convert it into a Hindu rashtra?

Doing a bit of arithmetic should explain this trend. The population of Muslims in India is 172 million or about 14.2% of the total population of the country. The representation of Muslims in most educational Institutions is dismal. According to government figures, only 13.4% of the total Muslims go for higher education and only 4.8% are graduate Muslims. With such a gloomy state of affairs, AMU becomes a suction point for a large number of young Muslim students. We may call this phenomena as  “educational ghettoization.” This ghettoization is multi-factorial, working both on merit and favor as in any other similar educational institution of the country. The emergence of AMU as an educational ghetto for Muslims is not only a matter of worry for the Muslims alone but actually a matter of shame for the Indian society as a whole. Ghettoization in any form is a collective failure of the society.

What compels the Muslims to choose AMU as their alma mater? The factors which come to my mind are probably the same as those which operate when a Muslim couple is denied a rental house in country’s prominent metropolises. I know some among you will be rolling your eyes and raising your eyebrows on my analogy but the fact remains that ghettoization whether in a neighborhood or in education operates in the presence of bias and prejudice. Despicable campaigns of collective hatred against Muslims in the last four and half years have only fortified this phenomena of ghettoization. It may thus be clarified that murderous attacks of cow vigilantes are not merely meant to end cow slaughter, it operates on a broader leash of instilling fear in the minds of the Muslims thereby further limiting their outreach whether in housing, education, or other aspects of social and political life. This unfortunately is the victory of the fascists.

So what should the student community of AMU do in these testing times?

They need to show restraint and patience. It is essential that they see through the program of channels like the one in question and throttle their efforts of provocation. This, in my opinion, would be the greatest frustration for the fascist brigade. Equally important for the students are to keep getting stirred up with injustices around them. World over, the most strong resistance to fascism and authoritarianism has come through institutes of higher learning. The students of AMU have a golden opportunity to align with similar cohorts at JNU, Jadhavpur university, Hyderabad university, Allahabad university, Madras university and all other educational institutes of learning which have seen an unprecedented assault on their values of freedom, liberty and free will. To be relevant in the times of authoritarianism it is essential that we remember what Paulo Freire, the greatest educationist of our times has once said, “education either functions as an instrument which is used to facilitate integration of the younger generation into the logic of the present system, and bring about conformity or it becomes the practice of freedom, the means by which men and women deal critically and creatively with reality and discover how to participate in the transformation of their world.”

Its time that this nation seeks truth in the second part of what Freire had said about education.

The author is Professor of Orthopaedics at AIIMS, New Delhi