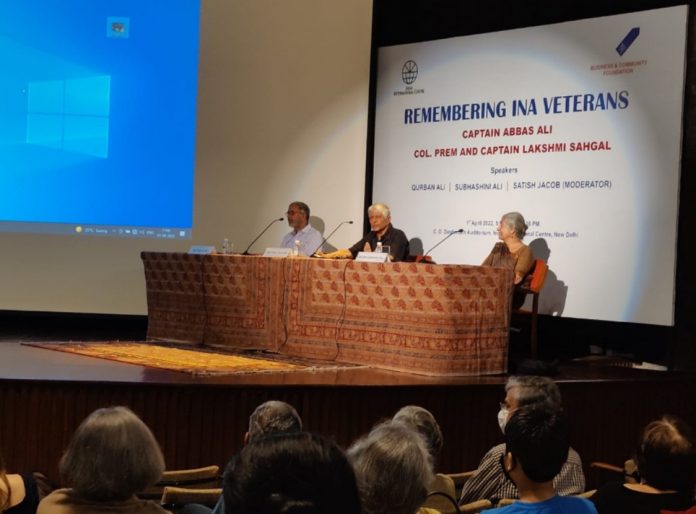 New Delhi: INA veterans Capt. Abbas Ali, Col. Prem, and Laxmi Sahgal, who were the unsung heroes of India’s liberation movement and whose sacrifices were virtually forgotten by the nation, were paid rich tributes at a memorial meeting held at India International Centre here on Friday. It was a lively evening that added to the understanding of the INA veterans’ bravery stories, which were told by their direct family members.

The event takes on added significance in light of the current regime’s attempts to “belittle” Gandhiji’s reputation in order to prop up Netaji Subash Chnadra Bose in his place.

Speaking on the occasion about his late father Capt Abbas Ali, noted journalist Qurban Ali said in spite of accomplishing the mission of independence from the Britishers his father was not a happy soul.

“After his release in 1947, Capt. Abbas Ali was in great pain as the new government of free India didn’t treat him well. He was hoping to join the Indian Army but  then army chief General Carriappa, who himself was loyal to his British masters, announced that he cannot take ex-soldiers of erstwhile British Indian Army into the new army of independent India since they were no longer disciplined. His diktat was approved by the then Congress government.”

Captain Abbas Ali was born on 3rd January 1920 at Khurja, Bulandshahr district of Uttar Pradesh in a Muslim Rajput Zamindar family. He belonged to a family of freedom fighters – one of his grandfathers, Janab Rustam Ali Khan, was hanged at Kala Aam in Bulandshahr district of then United Province (now Uttar Pradesh) after the mutiny of the Great revolt of 1857. His father, Janab Ayyub Ali Khan, was a Dafadar in the British Army during First World War and served in Aden (Yemen). From his early days, Capt. Abbas Ali was inspired by revolutionary ideas and somewhat romanticised the freedom movement. When Shaheed-e-Azam Bhagat Singh was hanged on 23rd March 1931, at Lahore in united Punjab, Capt. Abbas Ali was a student of 5th standard and was just eleven years old, but he participated in a protest march on 25th March 1931 in Khurja to denounce death sentence to Shaheed Bhagat Singh. In the protest march/Juloos, a patriotic song was sing in the memory of Shaheed Bhagat Singh of which the couplets were,

Capt. Abbas Ali used to sing this song throughout his lifetime in the memory of Bhagat Singh. Soon after the hanging, he joined NAUJAWAN BHARAT SABHA established by Bhagat Singh and actively participated in the activities of NBS, while he was in school.

Qurban Ali recalled his tremendous fascination to Bhagat Singh, saying that when he learned from across the border in 2012 that some ardent Pakistanis were planning to commemorate Bhagat Singh’s birthday on August 30th, he quickly congratulated and wrote to them.

“My Dear Comrades and Friends in Pakistan,

“I am delighted to hear that Bhagat Singh Memorial Committee in Pakistan has decided to hold a seminar in the memory of Shaheed-E-Azam Bhagat Singh, a great freedom fighter of undivided India and is also planning to celebrate his birthday on 28th September 2012 at Bhagat Singh Chowk, Lahore.

I would love to attend these functions you are organising but now at this age (93) it won’t be possible for me to travel from Delhi to Pakistan. But I wish you all the success and extend my best wishes for this noble cause.

He moved to Aligarh Muslim University for higher studies after graduating from JAS High School Khurja, district Bulandshahr, in 1937. He met Prof. Kunwar Muhammed Ashraf, the prominent communist leader of his period, while completing his studies at AMU. Inspired by him, he first joined the All India Student Federation (AISF), a student wing of left-wing parties founded in 1936, and later enlisted as a Junior Commissioned Officer (JCO) in the British Army (R.I.A.S.C) in 1939 during WWII (1939-45).

Prof. K M Ashraf, his mentor, believed that the country cannot be liberated from Britishers through Gandhian means of non-violence. He suggested that a large number of Indian youths enlist in the British army and revolt from within.

When Japanese forces attacked British forces in Southeast Asia, Capt. Abbas Ali, who was a member of the British forces, fought back. he  became a prisoner of war (POW) with the Japanese after General Percival surrendered with over one lakh British troops after the Japanese destroyed two important British warships, the Royal Navy battleship HMS Prince of Wales and the battlecruiser HMS Repulse. During his incarceration, he joined General Mohan Singh’s Indian National Army (INA) or “Azad Hind Fauj.”

Capt. Abbas Ali actively engaged in Netaji Subhash Chandra Bose’s mission “Dilli Chalo” when he arrived in Singapore in 1945 to reform the Azad Hind Fauj. Abbas Ali was present when Netaji presented the order of the day and addressed his Indian National Army at the tomb of the last Mughul King Bahadur Shah Zafar. Later, he fought at Arakaan with his own British Indian Army, but when the Japanese surrendered to the allied troops, Abbas Ali was imprisoned along with 60,000 other INA soldiers. While three of the INA heroes, Dhillon, Sehgal, and Shahnawaz, were imprisoned in Red Fort and tried there, Abbas Ali and three of his companions were imprisoned in Multan Fort, tried, court marshalled, and awarded the death sentence in 1946.

When Pundit Jawaharlal Nehru became the interim Prime Minister on 3rd September 1946 and India gained Independence in 1947, he was released by Indian Government.

He said it was a sad reflection on the free India government because the INA’s beleaguered warriors were not compensated or recognised as freedom fighters until the late 1970s.

Capt. Abbas Ali, a loyal nationalist, refused to accept any perk or award from the federal  government because of this. He never applied for the freedom fighters’ pension because he believed it was the government of free India’s responsibility to acknowledge and reward the services of the freedom warriors, but they were treated horribly instead.

Most of his family members moved to Pakistan after the partition, but he and his father chose to remain in India and serve their homeland.

He played a crucial part in the formation of the first Non-Congress Samyukta Vidhayak Dal (SVD) government in Uttar Pradesh in 1967, as the state General Secretary of the Samyukta Socialist Party, SSP, led by late Chaudhry Charan Singh, who later became Prime Minister of India in 1979. He was detained more than 50 times during the socialist struggle (1948-74) in various civil disobedience movements. During the horrific emergency of 1975-77, he was imprisoned in several Allahabad jails for 19 months under DIR and MISA in Bulandshahr, Bareilly, Agra, and Naini. He became the first President of the Janata Party’s Uttar Pradesh branch when the emergency was abolished in 1977 and the Janata Party came to power. He was elected to the UP Legislative Council in 1978. He passed away peacefully on 11th October 2014 after a brief illness in Aligarh.

On the occasion former MP and CPI(M) leader Subhashini Ali Sahgal also spoke about her   parent Col. Prem and Laxmi Sahgal. She asserted that INA members were actual nationalists, as opposed to today’s “nationalists” who collaborated with the British government.

Veteran journalist Satish Jacob conducted the proceedings in his unique style and shed light on the INA veterans. During the event, a documentary film about Capt Abbas Ali was also screened.