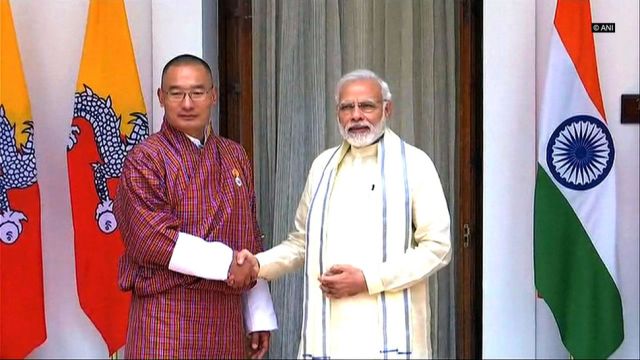 New Delhi : As India and Bhutan mark 50 years of diplomatic ties this year, the two sides reaffirmed their commitment to cooperation in the hydropower sector during a meeting between Prime Minster Narendra Modi and his Bhutanese counterpart Tshering Tobgay here on Friday.

“The two Prime Ministers reviewed the bilateral economic and hydro-power co-operation, including the progress in implementation of the on-going GoI-assisted-hydro-electric projects in Bhutan.” the External Affairs Ministry said in a statement.

“They agreed that the robust partnership in the hydropower sector was mutually beneficial,” it stated.

“They reaffirmed their commitment to further strengthen collaboration in the hydro-power sector in the spirit of close friendship and co-operation that characterize relations between India and Bhutan.”

India is a leading development aid partner for the Himalayan kingdom. There are a number of institutional mechanisms between India and Bhutan in areas like security, border management, trade, economy, hydroelectricity, development cooperation and water resources.

New Delhi has set up three hydroelectric projects in Bhutan with a total capacity of 1,416 MW, which are operational. About three fourth of the power generated is exported to India and the rest is used for domestic consumption.

President Ram Nath Kovind said on Friday that India and Bhutan share an exemplary bilateral partnership and the relations between the two countries were unique.

“India and Bhutan share an exemplary bilateral partnership. Our relations are unique and special,” he said.