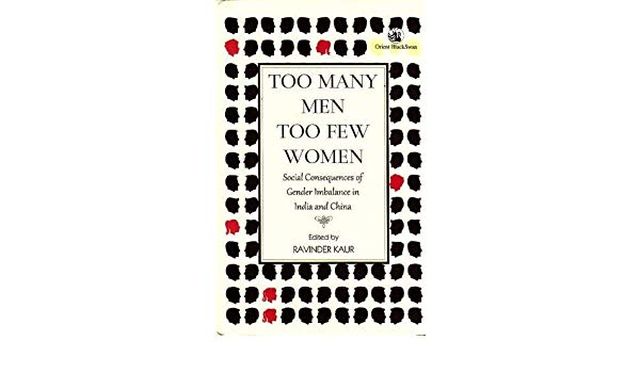 Much of the scholarly work on adverse sex ratios or gender imbalance until now has primarily focussed on the identification, patterns and causes of skewed sex ratios, and very little on their consequences. This offering, on the contrary, focuses on their social consequences in China and India — two of the world’s most populous countries — by presenting an empirical work and ethnographic accounts by well-known sociologists, economists and demographers.

At the onset, editor Ravinder Kaur, a noted professor of Sociology and Social Anthropology at IIT-Delhi, highlights that the gender balance in Asia is significantly shaped by the “male biased sex ratios” of India and China. Kaur points out that rapid fertility declines in the two countries, resulting from China’s one-child policy and India’s two-child norm, coupled with son-preference and the advent of sex determination technologies, has contributed to an excess of males and a shortage of females in both countries.

Once the proposition is explained, the respective authors dealing with diverse subjects elaborate on the social consequences of gender imbalance in India and China. Of all possible outcomes and consequences, “The Marriage Squeeze”, mentioned by almost all contributors in the book, comes across as the most striking.

What is “the marriage squeeze” and why are India and China likely to face it in the coming years?

In layman’s terms, marriage squeeze is one of the fundamental consequences of the sex ratio imbalance which leads to mismatch in the “marriageable population”.

As per the assertions of demographers, the possibility of marriage depends on the supply of potential mates, which in turn is influenced by the sex ratio at birth, the population age structure and marriage patterns. Therefore, when “fertility declines rapidly and is accompanied by female-biased sex selection”, a far lesser number of women are born and enter the “marriage market”.

“It is important to note that the effects of the marriage squeeze are likely to be felt more than twenty years after the appearance of skewed sex ratios,” the book points out.

But what is the likely impact of the marriage crisis on left-out men?

The book maintains that due to the economic, social, moral and psychological importance of marriage in both the Indian and Chinese societies, the “shortage of brides” has taken on immense importance in the public imagination, and as the demographers point out, it has become one of the most significant negative impacts of the sex ratio imbalance.

“With age, single men become a subject of ridicule amongst friends who have settled down,” says one of the respondents from a Haryana village, quoted in the book.

In the cultural context of China too, “singlehood is a state of frustration, and even of deprivation”, which in the likely scenario, is expected to have adverse effects on the left-out men. The book also claims that men living in rural areas are likely to “suffer more” as the bride shortage is often exacerbated by “women moving to urban or more prosperous areas”.

Monica Das Gupta’s chapter “China’s Marriage Market and Upcoming Challenges for Elderly Men” mentions that the proportion of never-married in China will be especially high among poor men in low income provinces, which are “least able” to provide “social protection programmes”. Other factors resulting in men remaining unmarried, according to the book, are addiction to drugs or alcohol, disability, and among other factors, social stigma. The marriage squeeze against men, the book notes, can be compounded by geographic factors such as residence in a less-favoured location.

Interestingly, the findings of the book suggest that under conditions of a male marriage squeeze, “women who are similarly disabled or whose reputations are similarly tarnished” are more likely to find spouses than men. At the same time, strictly in the Indian context, the consequences of the marriage squeeze are made worse by the fact that the traditional modes of dealing with bachelorhood are diminishing as the joint family declines and nuclear families become less welcoming of unmarried relatives.

The book finds that the marriage squeeze is also likely to have consequences on dowry and economic behaviour revolving around marriages.

“It is commonly expected that with the scarcity of women, the direction of marriage transactions would be reversed. It is conjectured that in India, dowry would decline, with some form of bride price taking place. In China, the effect is seen in the rise in bride price as men compete for scarce women,” writes Kaur.

So what should be the way forward?

The general view among scholars in the book is that “self correction” of skewed sex ratios cannot be left to happen by itself over a long duration.

“Rather, communities and governments need to take proactive steps to engender an equal value of the girl child. There is also a need to address the negative social consequences of sex ratio imbalance, which will continue to unfold in the future,” Kaur maintains.