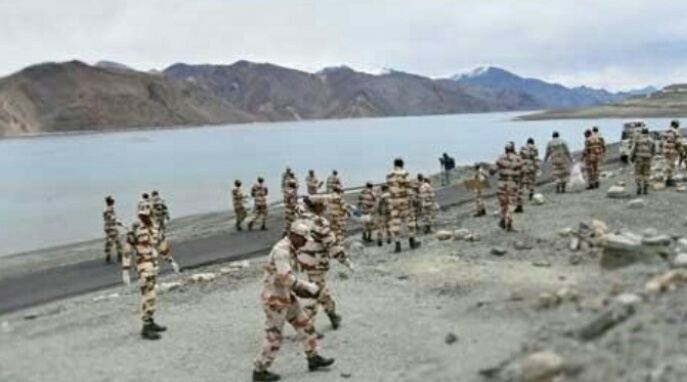 The world news headlines are all riveted with the growing-conflict between India and China and all eyes were fixed at India’s external affairs minister S Jaishankar meeting-with Chinese counterpart Wang Yi in Moscow on the sidelines of Shanghai Cooperation Organisation (SCO) which lasted for nearly three hours, as reported in The Print on September 11, 2020. ‘Hours before Jaishankar and Wang’s meeting began, brigade commanders as well as commanding officers on the two sides held meetings to discuss tensions (which had freshly erupted) at Pangong Tso on August 29, 2020’, informs the report 1. The Moscow talks however have not been ‘that enthusiastic’.

What assumes importance is that while when the talks ‘were on’ a report came in EurasianTimes 2 on September 10, 2020, that ‘Indian army has occupied critical heights including finger-4 overlooking PLA (Chinese) positions. As per reports, the pre-emptive operations to seize critical heights were carried near the Southern bank of Pangong Tso around August-end. Earlier, there were reports that PLA troops had conquered the heights near Finger 4 but the Indian Army has now occupied the heights which overlook Chinese positions. The Chinese have been sitting at Finger 4 from around April-May but have rejected to disengage from there and other friction points’.

In such a fast changing landscape of news information, almost one hour later Eurasian Times 3 again reported ‘China builds pressure on India by deploying 50,000 troops , 150 jets & surface to air missiles at LAC. Today (11th September), as Indian & Chinese foreign ministers successfully concluded meeting in Moscow, there were reports that the Indian side had highlighted its strong objection at the massing of PLA soldiers and military equipment along the LAC without any credible explanation for the deployment. China has positioned around 50,000 troops, air missile systems, a large section of rocket forces and 150 fighters along with bombers and other jets at airbases based in Xinjiang and Tibet, within a striking distance of the de-facto border, their largest build-up of troops in the region. However, India has steered a clear warning towards Beijing against breaching the Indian perimeter around its forward posts, which includes barbed wire establishments on the heights. “They constitute a red-line. In fact, nowhere are we under-prepared now.” the official said. New Delhi’s warning to Beijing comes at the back of bullets being fired in Mukhpari Top in the Chushul sector on Monday (September 07), the first time in 45 years in the Ladakh region. The PLA has been steadily bolstering its build-up in the region since May which includes troops participating in a military exercise in Tibet. According to intelligence from the top officials, the PLA troops are working under the direct instructions of Beijing and if the actions lead to a war, China will have to pay a big price’.

How the brigadiers-meeting must have fared, hours before the foreign-ministers talks, can be understood as to what IndiaToday 4 has reported. ‘Indian, Chinese brigadiers have heated exchange on Ladakh over hotline According to sources, the two brigadiers had a heated exchange over the hotline over the Chinese troops’ attempt to approach the Mukhpari Peak, dominated by the Indian forces, and the use of medieval weaponry by the PLA. ongoing brigadier-level talks between officers from Indian and Chinese armies took a sour turn as military leaders from both sides decided against holding in-person talks after (August 29, 2020 ) LAC clash. Government sources have revealed that Chinese soldiers who attempted to close-in on one of the Indian forward positions along the LAC, were carrying brute weapons like spears and machetes’. Things of course have escalated to such an extent that now ‘meetings’ in-person has become impossible.

The big questions that surmounts is who fired first on August 29, 2020? As it is claimed that Chinese abide by the dictum ‘never to fire first’. And, it is getting notable clear by all what is being claimed is that, ‘India fired first’ China repeats after New Delhi says PLA fired at Pangong Tso’ says the headline of The Hindustan Times 5 , on September 8, 2020, towards which the Indian army issued a statement that its troops exercised “great restraint and behaved in a mature and responsible manner” despite the grave provocation by Chinese troops who fired shots to intimidate Indian troops. But, the statement is ambiguous as to who fired first? The Chinese army too issued a statement, ‘“The Indian side’s move seriously violated related agreements reached by both sides, stirred up tensions in the region, and would easily cause misunderstandings and misjudgments, which is a serious military provocation and is very vile in nature.” 6

This Jaishankar meeting assumes all the more importance as it had come after India defense minister Rajnath Singh and Chinese counterpart Wei Fenghe had already had a ‘foiled attempt’ for any amicability after they had met in Moscow on September 2, 2020. 7 How China considers the ‘entire situation’ now, after the talks with Jaishankar has been spelled in an editorial, in its state-owned media outlet The Global Times on September 11, 2020 8. The editorial is loaded with importance as now it seems that the space for any room for dialogue is fast getting squeezed into the corner. The headline claims ‘Chinese-Indian foreign ministers reach consensus beyond expectations; peace depends on India keeping promise.’ Regarding the joint-statement issued, the skepticism is brewing. ‘ The successful implementation of the joint statement, however, depends on whether the Indian side can truly keep its word. Given the country’s history, it is possible that the joint statement will end up as merely “paper talk,”. It has been learnt that both the sides have agreed over a five-point consensus , which is ‘maintaining communication through meetings by the Special Representatives of India and China and expediting the completion of new measures to build mutual trust, marking an important step since the conflicts first took place’ But China does not seem to be very hopeful of it. “We should not only observe what India says, but also what it does. For a country like India, the most important thing is how it acts. “Only a strong military can wake up a sleepy India, words are not enough.” referred the editorial.

In another article published in The Global Times on September 11, 2020 9 , it speaks almost in a language of war and stresses five-point in the same article as to how China has had prepared for a war. At point number-4 it reconfirms that ‘the first shot is fired by the other side, not China. The international community should be fully aware of this’. It further informs ‘China must be a country that dares to fight. And this should be based on both strength and morality. We have the power in our hands, we are reasonable, and we stand up to guard our bottom line without fear. Going by the posturing it seems war is what likely to be.

India too is all gearing up to meet to China as defense minister Rajnath Singh has taken a meeting with NSA Ajit Doval along with Air-force and Navy-Chief to take stock of the situation at LAC for over two hours 10, on September 11, 2020, and a stern warning has been given to Pakistan by CDS Bipin Rawat to ‘suffer heavy losses if it dares misadventure’ 11 towards which Islamabad has countered ‘Pakistan’s readiness to respond to any Indian misadventure is also known to the world’ 12 . However, much to the nemesis of PM Modi, Opposition has sought to know if India has acceded to China its parts as there is no mention of April status-quo ante in the joint-statement 13 . PM Modi is yet to reply to it as well as to China across the borders.

But, war is what has never helped as it would be in the interest of the two highest-populated nations in the world to de-escalate the situation and jointly start to fight out the COVID-19 pandemic which has created the biggest havoc in the history of mankind.

The writer is a former UP State Information Commissioner. He writes on International Politics.

China sets up military base at Finger 5 of Pangong Lake, cutting off Indian Army