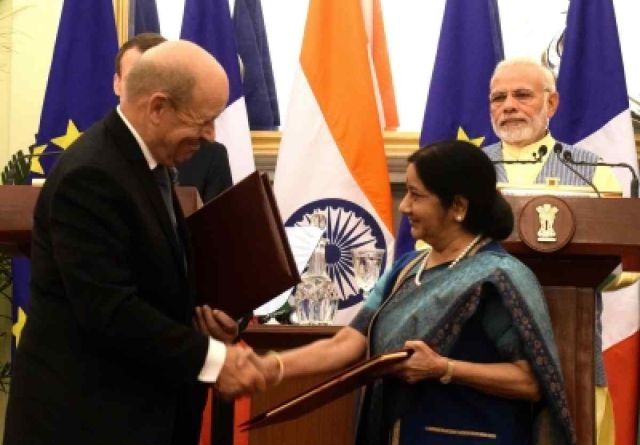 New Delhi : With China’s increasing presence in the Indian Ocean Region, India and France on Saturday announced broadbasing of their ties through a joint strategic vision for cooperation in the region that agreed on the need to establish an open, inclusive and transparent cooperation architecture for peace, security and prosperity there.

After talks between visiting French President Emmanuel Macron and Prime Minister Narendra Modi, the two sides also signed 14 agreements, including one that prescribes the way forward for the implementation of the Jaitapur nuclear power plant.

In a nine-page joint statement issued after the talks, the two countries reiterated their strong condemnation of terrorism in all its forms and manifestations, including cross-border terrorism and terror incidents in France and India.

They also called upon all countries to work towards rooting out terrorist safe havens and infrastructure, disrupting terrorist networks and their financing channels and halting cross-border movement of terrorists like Al Qaeda, Daesh/ISIS, Jaish-e-Mohammed, Hizbul Mujahideen, Lashkar-eTayabba and their affliates as well as terrorist groups threatening peace and security in South Asia and the Sahel region.

With Modi by his side, Macron told media persons that both France and India are giving a new momentum to their strategic partnership against terror. “We will fight together radicalism and terrorism,” he said.

According to the joint strategic vision document, India and France shared concerns over the emerging challenges in the Indian Ocean Region that include maritime traffic security in the face of the threats of terrorism and piracy, especially in the Horn of Africa, and respect of international law by all states, in particular freedom of navigation and overflight, among others.

This can be seen as a strong signal to China given its attempts to increase its footprint in the region.

“Both of us agree that the Indian Ocean region will play a significant role in the future for the peace, prosperity and development of the world,” Modi said while addressing the media along with Macron after the talks.

“Whether it be environment, maritime security and resources, freedom of navigation or overflight, we are committed to strengthening our cooperation,” he stated.

Though France is not against the recently revived quad of India, the US, Japan and Australia that seeks to work for peace and prosperity in the Indo-Pacific region, Paris would rather like to work with New Delhi bilaterally in the Indian Ocean Region given that there are around two million French citizens in its territories in the region.

According to the joint strategic vision document, such cooperation between the two sides will help in harnessing the opportunities and meeting the challenges together in the Indian Ocean Region.

“The two leaders are desirous of associating other strategic partners in the growing cooperation between India and France, as and when required and, in this regard, would establish trilateral dialogues,” the document stated.

“They also agreed on the need to establish an open, inclusive and transparent cooperation architecture, with the aim of delivering to all associated with the region, peace, security and prosperity.”

Modi and Macron decided that both countries would strengthen coordination in existing regional and international bodies to carry out this objective.

It stated that both countries will be open to inviting strategic partner countries in the region to participate in Indo-French exercises.

Among the agreements signed was a memorandum of understanding between the Indian Space Research Organisation (ISRO) and the National Centre for Space Studies (CNES) of France aimed at co-developing a maritime surveillance satellite system focused on the Indian Ocean and related data fusion mechanisms. This system would significantly strengthen maritime domain awareness in the Indian Ocean region.

The two countries also released a joint vision on space cooperation which envisages, among others, addressing global challenges, including climate change and exploring the solar system and beyond.

According to the joint statement, both sides “agreed to enhance operational cooperation between the Indian and French counter-terrorism agencies and launch a new cooperation effort to prevent and fight radicalisation, in particular online”.

With the Nuclear Power Corporation of India and French firm EDF signing the agreement on the way forward for implementation of the Jaitapur nuclear power plant, the joint statement said that the two leaders welcomed the understanding shared by the two parties on the enforcement of India’s rules and regulations on Civil Liability for Nuclear Damages applicable to the Jaitapur project.

Stating that there is a long history of cooperation in defence, security, space and high technology, Modi, in his address to the media, said there is bipartisan support in both countries on the bilateral relationship.

“We share a deep defence relationship and we see France as one of our most trusted partners in this area,” he said.

“All services of our defence forces regularly hold discussions and conduct joint exercises. We have strong ties in defence equipment and production. We welcome France’s commitment to Make in India in the defence sector.”

Modi also said that people-to-people ties, especially among the youth, are the most important dimension for the bright future of the bilateral relationship.

“We want our youth to know, see, understand, live, and work in each other’s countries so that thousands of ambassadors emerge in the process,” he said.

For this, he said, two agreements were signed following Saturday’s talks — one on mutual recognition of academic qualifications and the other on mobility and migration partnership.

Among the other agreements signed were those on cooperation on high speed and semi-high speed rail, sustainable urban development and credit facility of 100 million euros for funding of smart city projects.

Earlier on Saturday, Macron was accorded a ceremonial welcome at Rashtrapati Bhavan here following which he told the assembled media that France should be the best partner for India and the entry point to Europe.

Following the bilateral talks, Modi and Macron interacted with CEOs of India and France to take the partnership forward at the CEO’s Forum.

There are around 1,000 French companies operating in India with over $7 billion in investments.

Macron, who arrived here on Friday on a four-day visit to India, will on Sunday co-chair with Modi the founding conference of the International Solar Alliance (ISA) that was launched by the Indian Prime Minister and then French President Francois Hollande during the Paris climate summit in 2015

The ISA is conceived as a coalition of solar resource-rich countries to address their special energy needs and provide a platform to collaborate on dealing with the identified gaps through a common, agreed approach.