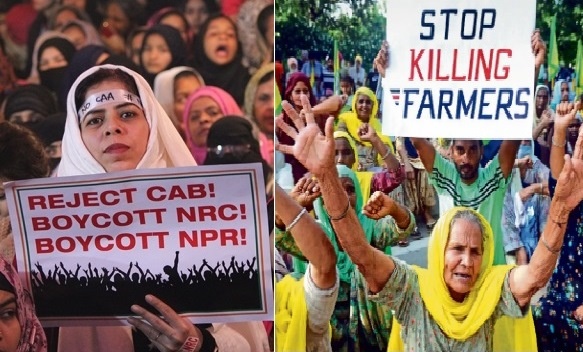 India has moved into 2021 with the following crisis. Indians are looking at the government for its solution. Government’s stok silence on all these issues speaks to its inability to set things right.

Economic Peril- What started from demonetization to ill-planned GST to prolonged lockdown, Indian economy has taken one hit after another.

Assertion of majoritarianism- Under the Modi rule there is huge assertion of right wing Hindutva forces.  The secular aspects of the constitution have suffered serious blows and minorities particularly Muslims, have been feeling insecure.

Democratic Space is shrinking- There is an increasing feeling of the narrowing of democratic space which is a huge worry for the people of the country.

Agrarian Crisis- India’s farm economy is in turmoil Suicides, debt burden, falling prices of produce are part of agrarian crisis.  An estimated 26 crore people work in the agriculture sector. This is to say that about 55-57percent of the population is dependent on the farm sector.

Political Arrogance – It is from PM Modi downwards, all those holding the reins of governance are full of arrogance. Politicians consistently misuse their position and members of bureaucracy are at their worst.

Unemployment- One in three formally trained youth in India is unemployed. Pandemics have hugely contributed to unemployment.  The 1990s employment bubble has burst and Indian youth are back to 1970s syndrome.

Media Menace- Misinformation, hate speech and false propaganda has become part and parcel of Indian media discourse. The government of the day and the courts are presiding over the prostitution of the pen, that’s going on with impunity.

Pending Justice- Justice delayed is justice denied.  Bureaucratic sloth coupled with slow settlement of cases in courts is a scourge in this country. Many Kafkaesque trials are going on in India.

Poor Police system- India has a ratio of 138 police personnel per lakh of population.  Less than 25 percent of Indians do not trust the police. The distrust is due to the inhuman way of police treatment with the people.

Water Crisis – While the government is busy building a new Parliament, India is facing the worst water crisis. The NITI Aayog has warned that the demand for drinking water will outstrip supply by 2030 if preventive steps are not taken. Experts predict that 21 big cities will run out of groundwater by 2030.

Monsoon Fury- Floods are synonymous with monsoon. It’s the same story every year: thousands evacuated, hundreds dead, livelihoods lost, villages and settlements washed away, houses submerged etc. In the end authorities are blamed for doing nothing.

Corruption- The most widely spread endemic in India is corruption, which is ignored even though it was touted as the second freedom struggle in 2014 general elections.

Basic Sanitation- Sanitation is yet another problem, one of the biggest, in India. There are about 700 million people who have no access to basic toilets at home.

Healthcare System- India is world’s most populous country but it grossly lacks in providing proper healthcare facilities to its entire population. It was thought that pandemics could be made the reason to augment the health infrastructure but that never happened.

Poverty – The population of India living below the poverty line has declined over the years but poverty has not been eliminated from the country. It is said that one in five Indians lives in extreme poverty.

Pollution- Pollution and other environmental issues that are the other challenges before India but little attention is given to face the situation.

India has taken giant strides in the last few decades. But this does not mean to forget issues, which continue to pose hurdles in the progress of the nation. These social, political and economic issues are to be taken seriously to improve the prevailing condition of our society. With the proliferation of information and technology, more awareness is spreading among the masses. As Indians we should really work hard to eradicate these problems from their very roots. Blaming the government and others will remain counterproductive.