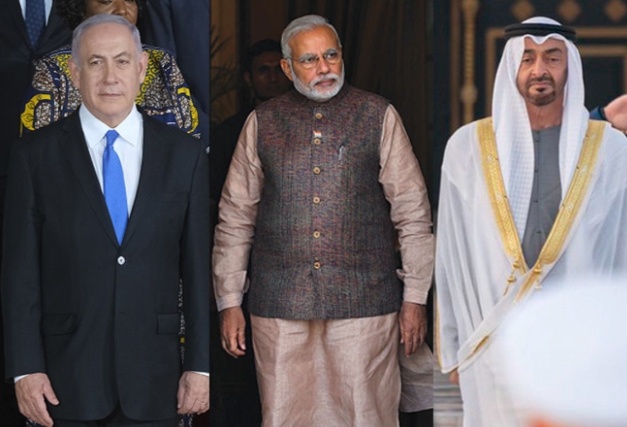 If the trilateral economic association between Israel, India and the UAE goes well, it would be a game changer in the regional economic and security cooperation.

A couple of days back the three nations came together in Dubai to tap their innovative (Israel), financial & supply chain network (UAE) and market (India) potential.

The event was organised by the International Federation of Indo-Israel Chambers of Commerce (IFIICC) in Dubai. IFFIICC was founded in December last year.

As claimed, the three nations can potentially create worth USD 110Bn trade by 2030.

UAE, India’s third largest trading partner after China and the US, is poised to increase its total bilateral trade to USD 100 Bn from USD 60 Bn in the next half a decade.

The collaborative efforts of three countries offer the scope for innovation, access to big markets and deep pockets to finance costly ventures.

The UAE ambassador H. E. Dr Ahmad AlBanna called the UAE a gateway to the world and this trilateral could benefit the world. Another member underlined that innovation and economic prospects of this trilateral are endless.

The troika has also enormous security potential. They are capable of ensuring a joint common security umbrella. It would be easier to handle the security challenges, instead of the whole region. Already Israel is offering its services to the two other countries in cyber security.

It seems that the cooperation of the three offer big potential but how much they materialise it depends upon their willingness,overcoming political and mindset barriers.

It is also to be seen how the troika responds to the US. What will be its regional impact will also be interesting to see.

Will this provoke Iran, Turkey and Qatar to form such grouping… What will happen to Saudi Arabia…with whom it will cement such alliances…are some of the curiosities.

It will be too early to say it’s impact on big powers such as Russia, the US and China.

It is also to be understood commonly that generally “finance” is taken for granted, while the market receives better attention and technology tops the list. However, here all three countries are equally important.

Let’s see how they share the benefits, overcome hurdles and tap the potential of their natural partnership.