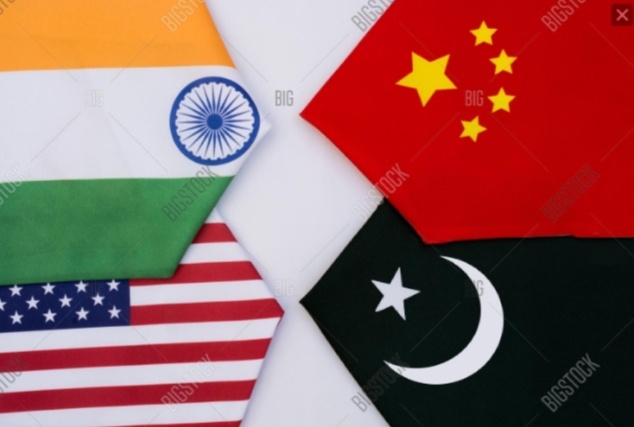 India has played the masterstroke and in order to reply to the ‘joint-threat’ of China and Pakistan, which had found a renewed-aggression, after India’s PM Narendra Modi had ended Article 370 from JK&L, which gave the region a special status, on August 5, 2019, and which made both China and Pakistan straddle together against India, since one and a half year, and more particularly since June 15, 2020, when India lost 20 of its soldiers to China, there has only been a ‘bittering-of-ties’ between China and India, with Pakistan playing second fiddle to it, despite the numerous rounds of talk, at diplomatic, political and commander-levels.  Ironically, while India saw to US for rescue, its President Donald Trump, offered only mediation! This he did twice informed OutlookIndia.Com on May 27, 2020 1  and on September 5, 2020 2 and all the while when India looked for more help, Trump again ridiculed India with his third-time mediation offer on September 25, 2020 tells TimesNowNews3 . During this time, China is said to have illegally occupied 38,000 sq kms of Indian land in Ladakh, as acknowledged by India’s defense minister Rajnath Singh in parliament on September 17, 2020,   and has also started to put up its designs on Arunachal Pradesh which China calls as its South Tibet as well as in Himachal Pradesh too.

US did not commit and let India slide into misery. US always wanted India to counter China in the first place, but India considered Pakistan as its primary-foe, and India in all over these years, from much before August 5, 2019 , despite its disastrous 1962 war with China, did not commit into US lap for an all out show against China. It wasn’t that long enough when PM Modi had announced, according to The Economic Times 4, July 9, 2018, and much to the displeasure of US when he rejected US invitation to join Indo-Pacific front against China, ‘India does not see the Indo-Pacific Region as a strategy or as a club of limited members. Nor as a grouping that seeks to dominate. And by no means do we consider it as directed against any country. A geographical definition, as such, cannot be,’ something which disappointed Japan alike, and this stand from India came despite Modi enjoying a personal rapport with Trump, but now India is in-togetherness with Japan, US and Australia as a part of QUAD against China, to meet China is its South China Sea.

The last straw which hinged for the US support to India was also lost on September 30, 2020 informs TimesofIndia 5  as while US president Trump and Biden debated in the run-up to November 2020 polls, Trump lumped India with its nemesis Russia and China! Trump made India to stand in line with Russia and China to have hidden the figures of the number of deaths in the wake of COVID-19 pandemic! It was here when India let loose and supposedly succumbed to the ultimate US maneuvering and was forced to become the US frontline ally against China.  The backend forces which were at work will take for some investigative writer, a La Bob Woodword, to unravel but finally US made India to comply to become a lullaby customer to its weapon industry.

US, on October 2, 2020 6 reveals LiveMint, came out officially in support of India to declare Arunachal Pradesh as part of India.  ‘Arunachal Pradesh is Indian territory and the United States strongly opposes unilateral attempts ( by China) to advance territorial claims by incursions, be it military or civilian, across the Line of Actual Control (LAC), a US State Department official said. Giving an update on the India-US bilateral relations, the senior official said, “At a time when India is facing substantial security challenges, the growth in our defense partnership is exceptionally important. This partnership includes defense sales, particularly our offers of advanced US weapon systems, as a demonstration of our commitment to India’s security and sovereignty.’ The US job was done. It got India sufficiently bashed-up to finally force India to become its face to China’s opposition.

The US initiative with India after its official stand on Arunachal Pradesh was riveted with a follow-up plan soon,  as on October 5, 2020  HindustanTimes 7  informed that US and India were to tie-a knot in Basic Exchange and Cooperation Agreement (BECA) for geo-spatial cooperation. ‘BECA is an important precursor to India acquiring armed drones such as the MQ-9B from the US as the unmanned aerial vehicle (UAV) uses spatial data for pinpointed strikes on enemy targets’. This enemy is the duo China and Pakistan. So much so, US had been ‘hit in the eye ’ by its shameless withdrawal from Afghanistan after 19 years of fighting Afghan-Taliban, where it was forced to sit across the table with the same people, that it has decided to ‘teach a lesson’ to Pakistan, its one time prime-most ally against what was once branded as  ‘war and terror’ which ravaged in Afghanistan. Trump is so foregone with his conclusive victory that barely a week before his November 3, 2020 elections Trump wants BECA be sealed!  US deputy secretary of state Stephen Beigun is already in India( October 15, 2020)  to chalk out nuances, and finally US defence secretary Mark Esper and India’s defence minister Rajnath Singh will ink the pact on October 26-27, 2020 .

The immediate fallout of this BECA will find Pakistan is very hard waters, as US, for all the last many decades had been with Pakistan and knows all the loopholes which would enable India to chose a target to bring Pakistan to its senses. India, with the help of US reconnaissance devices will know everything from inside Pakistan, in its real-time through US satellites;  Pakistan’s  troop deployment, its nuclear sites and its air-force/naval, army or drone movements. China is too big to be tapped, but for sure, Pakistan, will be made to have a ‘taste of its pudding’ as US ignominy in Afghanistan has happened due to Pakistan. US, China and to an extent India are giants and Pakistan is what seem to have been sandwiched between the three! What will happen after US election? How will Russia help Pakistan against US, by de-linking itself from India? To the advantage of China, is all to be seen or not.

India, as of now, seems upright with its preparation to meet China and Pakistan in what is called as a coming ‘two-front war’ these winters. Pakistan on its side, as a matter of its principle strategy, had in fact, long shied away from US Global Positioning System to China’s BeiDou by 2014 revealed SouthAsianVoices.Org 8 .