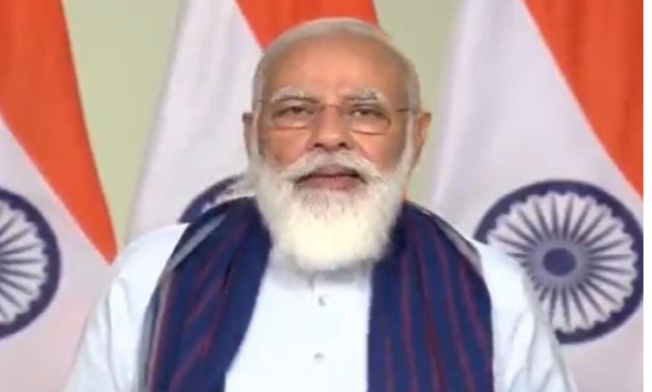 New Delhi: Prime Minister Narendra Modi on Monday lauded the efforts of the Indian scientists involved in developing the vaccine for Covid-19, and said India is soon going to start the largest vaccination programme in the world.

Modi made the remarks after inaugurating the National Metrology Conclave virtually and also dedicated the National Atomic Timescale and Bharatiya Nirdeshak Dravya to the nation.

He also laid the foundation stone for the National Environmental Standards Lab.

Speaking on the occasion, the Prime Minister said, “The new year has brought with it a new achievement. Indian scientists have not developed just one, but two Covid vaccines.”

He said, “We are on the threshold of starting the ‘largest vaccination programme in the world’. The entire country is indebted to all scientists and technicians,” he said.

The Prime Minister also urged the scientists of CSIR to discuss and converse with the students of the educational institutions in the entire country and share their experiences with the next generation.

“This would help in developing the next generation of young scientists,” he said.

The Prime Minister further said the quality of services and products in our country, both in the public or private sector, will determine India’s strength in the world.

“No research is complete with comparing and calculating. We also need to calculate our achievements as well,” he said.

He said, “We have to ensure that there is not only global demand but also global acceptance of ‘Make in India’ products. We have to strengthen brand India on the basis of quality and credibility.”