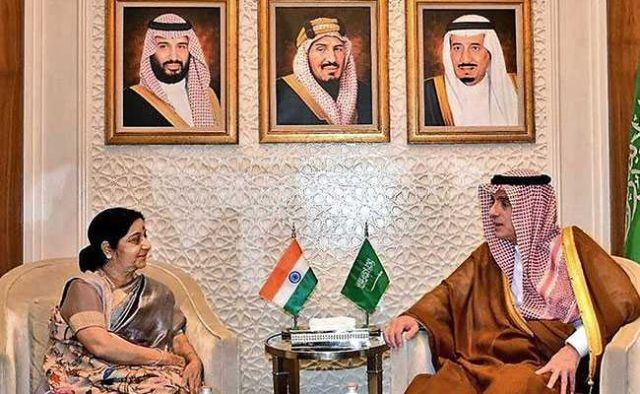 At the inaugural ceremony of the Saudi national and cultural festival Al Janadriyah, where India has been given guest of honour country status this year, Sushma Swaraj said “a large number of my Muslim brothers and sisters from India visit Saudi Arabia every year for Haj and Umrah pilgrimage.

“Once again I thank Your Majesty for increasing the Haj quota for India in 2017 and also for the special arrangements and care given to the pilgrims,” she said.

Last month, Saudi Arabia increased the quota of Indians for the Haj pilgrimage by 5,000 from this year.

Sushma Swaraj said that India’s participation at the Al Janadriyah Festival “provided an opportunity to showcase our strong bilateral relationship”.

Earlier on Wednesday, Sushma Swaraj called on King Salman here and “steps to further intensify our strategic partnership in all sectors and to work together towards each other’s progress came up during (the) warm discussion,” according to Kumar.

Prior to that, Sushma Swaraj met her Saudi counterpart Adel Jubeir and discussed deepening of bilateral ties.

According to Kumar, the discussions between Sushma Swaraj and Jubeir focused on enhancing trade and investment, energy, defence and security, culture and people-to-people ties.

The India-Saudi Arabia relationship was elevated to that of a Strategic Partnership during the visit of then Prime Minister Manmohan Singh to the Gulf kingdom in 2010.

Saudi Arabia is the fourth-largest trading partner for India with bilateral trade exceeding $25 billion in 2016-17.

As India’s largest supplier of crude oil, Saudi Arabia accounts for about 20 per cent of the total annual imports.

The Gulf nation is also home to around 3.2 million expatriate Indians, that includes a growing number of professionals, including doctors, software engineers and oil technologists.

Sushma Swaraj arrived here on Tuesday on a three-day visit in what is her first official visit to this Gulf kingdom.

Haj is the most powerful journey to enhance spiritual and intellectual enlightenment: Dr. M Qutubbudin