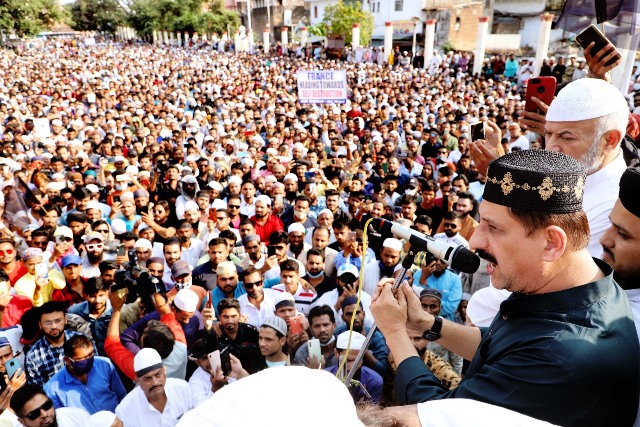 Scores of people staged a protest in Bhopal against Prophet Muhammad’s insults in France on Thursday. They raised concerns against French president Emmanuel Macron’s decision to support the prophet’s controversial cartoons published by Charlie Hebdo, a weekly magazine.

The city police on Friday said that as many as 2,000 have been booked for violation of –Covid-19 restrictions. Congress MLA Arif Masood is also among people booked by the police.

As many as 2,000 people, including Masood and some clerics, were charged under section 188 (disobedience of an order promulgated by a public servant) of the IPC on Thursday evening, Talaiya police station officer DP Singh said.

The protesters have violated the district administration order banning assembly of people in the wake of the coronavirus outbreak, he added.

Madhya Pradesh Chief Minister Shivraj Singh Chouhan tried to paint the protest as unpeaceful despite the fact that no violence or disruption of law and order was reported from the protest site.

The Chief Minister, who belongs to Hindu right-right wing Bharatiya Janata Party (BJP) said that Madhya Pradesh is a land of peace. “We will deal with those who disturb its peace with strictness. In this case, action is being taken by registering a case under section 188 of the IPC. No culprit will be spared, whoever it is.”

It is pertinent to note that the Chief Minister and his political associates had come under criticism in March when they purportedly violated Covid-19 norms by organising an oath-taking ceremony in Bhopal. The ceremony was organised in the wake of their decision to form their government in the state days after Congress party-led government collapsed as a result of its MLAs switching to the BJP.