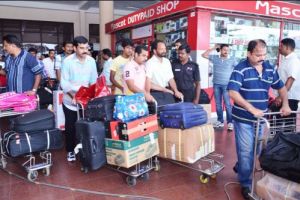 New Delhi, April 8 : External Affairs Minister Salman Khurshid said Monday that India is in touch with the Saudi Arabian government over the kingdom’s new work policy and would explore all avenues to find a solution during the three months of grace period announced by Riyadh.

“We are in touch with the Saudi government and will explore all possibilities in the three months of grace period announced, for which we are very grateful,” said Khurshid on the sidelines of an event here.

“We will proceed with objectivity, rationality and sobriety.. There are a huge number of Indians in Saudi and we should do nothing that detracts from the good work they are doing and the appreciation they are getting from the Saudi government,” he added.

The Saudi Arabian government two days ago announced a three-month grace period for enforcing its new work policy of “Nitaqat” (naturalisation) law, which would affect thousands of Indian workers there.

Khurshid said Overseas Indian Affairs Minister Vayalar Ravi and Minister of State for External Affairs E. Ahamed, both of who are from Kerala, would be meeting the Saudi Arabian labour minister, who is out of the country and is expected to return only on April 13.

Khurshid said that the issue had figured in talks with Kerala Chief Minister Oommen Chandy here Monday. He said he updated the chief minister, from whose state more than 5,00,000 people work in the kingdom.

“I brought him in the loop about steps to be taken and he said that we are happy with the Indian mission” in Riyadh and its handling of the Indian workers, he said.

There are 6.5 million Indians in the Gulf, including 2.45 million in Saudi Arabia.—IANS.