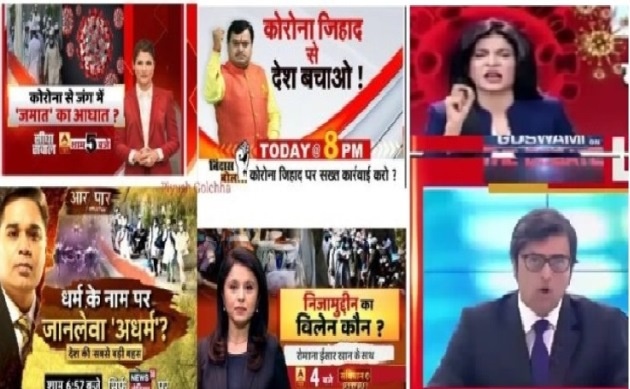 Indian journalism has had a long history of professionalism, operating within the infrastructure and the ethical parameters. But what is more intriguing and agonizing for me today that how Indian media has now turned out to be one of the most corrupt institutions with absolutely no ethics and responsibilities. In recent years, the Indian media has completely lost its credibility.

The Edelman report has labeled the Indian media as the second most untrusted institution in the world. The survey showed that the trust of people in media was an all-time low and the credibility and motive of these institutions have been under question. A total of 28 countries were surveyed, out of which Indian media was seen as the second most corrupt. It is not a surprise, given the fact how Indian journalists have used silly issues and blown it out of proportion to create panic among people.

There is indeed no trust in media and the news channels have turned out to be a gossip box, with people ranting nonsense 24 hours in India. The mainstream media, especially in India, is also losing its relevance with the emergence of social media. The low and falling quality of Indian journalism is evident in several ways. First, this country of 1.3 billion cannot claim to have a single magazine of ideas or literary journal of international standards. Nor does it publish a significant number of influential newspapers that are independent of corporate cartels or government control.

There is very little diversity in the range of social and political views expressed in the mainstream media. Islam and Muslim bashing are quite common on TV channels in India nowadays. Within their coverage, there is a pathological preoccupation and obsession with Pakistan. This has less to do with understanding the complex social and political processes underway there than with gloating over Pakistan’s problems and its difficult relationships with the US, Afghanistan, and Iran. The entire operation is clandestine. This malpractice has become widespread and now cuts across newspapers and television channels, small and large, in different languages and located in various parts of the country.

This has not merely undermined democracy in India but also tarnished the country’s reputation as foreign newspapers have started writing about and commenting on Indian media negatively. Nevertheless, it is heartening to still see some journalists who continue to put their lives and careers at risk to practice honest and meaningful journalism. Exposure to false or incorrect information is a key concern for people in 11 emerging economies, according to a recent Pew Research Center survey. India is one among the 10 countries. Many social media users report being regularly exposed to misinformation when using the platforms.

Indian Journalism is now endangered and what’s masquerading in its name is business — with an open display of bigotry, abuse, and hate against Muslims and other minorities. Of late, the Indian TV channels, digital media platforms, and print media have teamed up together to brand Muslims as anti-nationals and to demonize them through constant use of rhetorics like jihad, halala, triple talaq, beef eaters, love-jihad, Tablighi jamaat and anything that a devious mind can conjure.

This is a wake-up call for Indian minorities, especially Muslims, who have miserably failed to set up any strong media platform in India so far. It is high time to come forward, sit in conjugation, and take a pledge to increase their share in the media market of India. In this age of media, social media, and networking; the battle will be fought in the domain of media, not in the traditional war fields. There are hundreds of millionaires and billionaires among minorities in India and outside India, and they can join hand to set up a major media house to respond to the cruel designs of the fake or what we call nowadays Godi media.

Of course not every media house is like this. Some try to be trailblazers of truth and investigation. But media is a capital intensive industry. It needs money, especially to compete with the dazzling HD-quality channels or publications with subscribers in millions. Besides, the government can cut it off anytime or withhold advertisements to make it go bankrupt. It’s really a choice between Scylla and Charybdis.

There is also a need to create elite groups on social media platforms to respond to the misleading news and opinions flooding on different handles. Today, anyone with a camera phone is a journalist and everyone has a ‘journalistic’ opinion to air. A video is more easily consumable than an 800-word article. While it’s here on social media that bigotry against Muslims is more pronounced, it takes inspiration, and content, from the news channels that engage in hate 24X7. So, the question remains, why does Indian media detest Muslims so much? Why don’t news anchors like Sudhir Chaudhary, Arnab Goswami, Deepak Chaurasia, Amish Devgan, Anjana Om Kashyap, Rohit Sardana, Rajat Sharma, and their types ever get tired of demonizing Muslims day in and day out?

The Tablighi Jamaat fiasco is a good example. Like a herd of cattle that cannot think on its own, the 1500-odd men who were stuck at Delhi’s Nizamuddin Markaz continued to stay there while their spiritual shepherd — Maulana Saad — didn’t think it necessary to empty the premises despite the fear of the coronavirus. But were they the only religious groups who did this? No. The Tablighi Jamaat congregated between 13 and 15 March, but temples like Siddhivinayak and Mahakaleshwar were not closed until 16 March. Shirdi Saibaba Mandir and Shani Shingnapur Temple were closed only on 17 March, Vaishno Devi on 18 March, and the Kashi Vishwanath Temple was operating until 20 March — a day after our Prime Minister Mr. Narendra Modi had addressed the nation and called for ‘social distancing’.

Some news channels pointed these anomalies out but for the most part, the narrative to demonize and blame the entire Muslim community — and not only the Tablighi organizers — played on a loop. What did it lead to? Muslims began to be targeted, assaulted, beaten up, abused on streets by nameless goons and the police without any action against anyone. Even a BJP legislator went on record to call on Hindu brethren to boycott Muslim vegetable vendors and thelawals. The same media that helped propagate it conveniently ignored all the attacks on Muslims.

To this end, it is important to mention that this demeaning trend is watched by the world, the UN agencies, the Islamic countries, and the human rights organizations. In fact, fake news has been used rather assiduously in India to create a sense of unity within the majority. A feeling of unity to hate a common enemy and defeat that enemy by voting a Hindu nationalist political party that will safeguard their rights.

The ‘us vs them’ elixir has always worked. And so a premier liberal institute like Jawaharlal Nehru University (JNU) can be projected as the land of condoms and ‘anti-nationals’. In its annual World Press Freedom Index, the Paris-based Reporters Without Borders said that India was now 138th-ranked in the world out of 180 countries measured, down two positions since 2017 and lower than countries like Zimbabwe, Afghanistan, and Myanmar. When the index was started in 2002, India was ranked 80th out of 139 countries surveyed.

Moreover, the changing trends in media will eventually lead to a morass of degradation and possibly create a big divide between the Hindus and Muslims. In a recent trend, Bennett, Coleman and Co. Ltd, which owns the Times of India, is reported to have asked celebrities and the wealthy to pay for favorable coverage. They have offered a “private treaty” agreement, which accepts an equity stake in a company in return for favorable coverage. The New York Times described “private treaties” as an example of the commodification of business news. Similar practices by other media companies came to light as Jindal Steel sued the media company Zee News for allegedly demanding advertisements so as not to telecast shows about the Indian coal allocation scam.

According to Cobrapost.com, in its 2018 undercover operation, it approached the Times Group – the publisher of The Times of India, the India Today group, the Hindustan Times group, the Zee group, the New Indian Express group and other media houses – where it posed as a preacher of a fictitious organization named Srimad Bhagavad Gita Prachaar Samiti. It offered a payment of up to ₹500 crore (US$70 million) in cash to publish stories on Krishna and the Bhagavad Gita to first indirectly and later directly promote Hindutva ideology, communal and political gains. All three media houses agreed to the offer to plug paid news, alleged Cobrapost, but mentioned that they may editorially criticize the activities. The groups discussed ways to make large cash payments, alleged Cobrapost. According to Cobrapost, the owners, as well as the senior executives, of these and other major Indian media houses consented to engage in campaigns to induce communal discord and polarize the Indian electorate.

Are these not wake up calls for the minorities of India? Please stand, unite and forge an alliance to launch media projects in India. There are problems, but there is a space in which minorities-owed media can still operate.

In search of a platform to raise Muslim voices