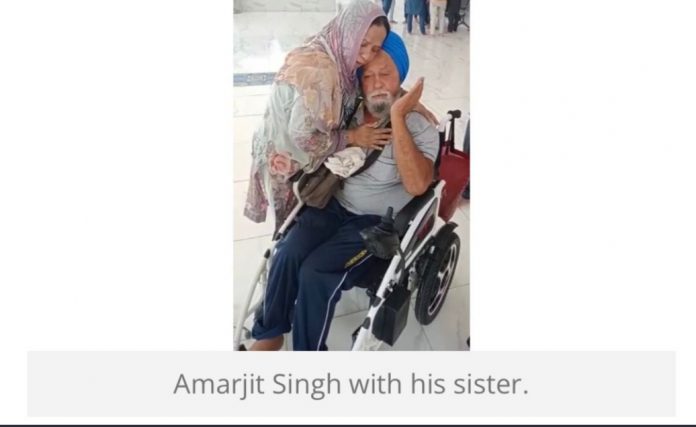 Punjab-based Sikh Amarjit Singh was overjoyed to finally see his Muslim sister from Pakistan at Gurdwara Darbar Sahib in Kartarpur after being split from his family for 75 years after Partition. Singh and his sister were abandoned in India after Partition as his Muslim parents moved to Pakistan, as per various media reports. Wheelchair-bound Singh had gone to Pakistan via the Wagah border with a visa to meet his sister Kulsoom Akhtar.

Singh’s sister Kulsoom Akhtar (65) said that she was born in Pakistan after her parents immigrated to Pakistan from the suburbs of Jalandhar in 1947. Singh was a toddler at the time, and was left behind along with another sister. She used to hear stories of the lost siblings and her mother used to cry remembering her missing children.

How does the reunion take place?

A few years ago Kulsoom’s friend, Sardar Dara Singh visited Pakistan and her mother told him about the missing kids along with the location of their village and home. The man went back and traced the lost siblings. Singh informed them that the daughter had passed away and the brother had been adopted by a Sikh family in 1947.  The siblings contacted each other over WhatsApp and decided to meet at Gurudwara Darbar Sahib. Singh reached there via the Wagah border while Akhtar, who suffers from chronic back pain, reached there with her son Shahzad Ahmad from Faisalabad. Both hugged each other and kept crying. Shahzad Ahmad, son of Kulsoom, said that he used to hear about his uncle from his grandmother and mother. He said that all of the siblings were very young at the time of Partition. Tears rolled down on their cheeks uncontrollably. Both the siblings brought lots of gifts for each other. Singh now plans to stay back with his sister as her guest for some time.

This is the fourth incident of siblings reuniting at Kartarpur. In August, two brothers — one Sikh and one Muslim — met after being separated while fleeing sectarian violence in 1947. In May this year, a Muslim sister from Pakistan met her Sikh brother. In November 2018, two Muslim sisters were reunited with their Sikh brother who had been left behind in India.