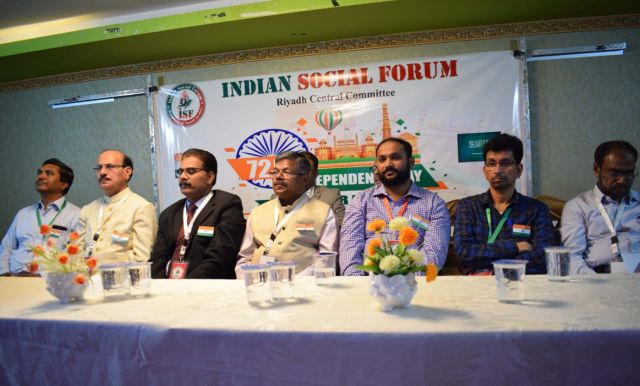 Riyadh: The celebration of the 72th Independence Day was held on August 15th by the Central Committee of the Indian Social Forum Riyadh at the Al Mas Restaurant Hall in Riyadh. People from different Indian states and different religious backgrounds were present during the occasion.

The program was inaugurated with the unity song. TT George, the second secretary of the Indian Embassy was chief guest.

Speaking after inaugurating the program, he said many civilizations have come and gone but the Indian civilization in the world is getting wealthy day by day.

Social Forum Central Committee president Janab Harris Angaragundi Mangaluru chaired the program and welcomed the guests. In his presidential speech he urged everyone to keep continuing their good work for the nation as well as for Indian community in Saudi Arabia.

Indian Social Forum convener Janab Afzar ul Haq delivered the Independence Day message. He said India was formed based on concept of ‘unity in diversity’ and it becomes every Indians’ responsibility to safeguard it.

He expressed concern over growing insecurities and lack of unity in the nation.

He also told that the people who are operating on lines of fascism today are teaching the lesson of nationalism to the ones who were in forefront of freedom movement.

“Freedom of speech is being curbed systematically by killing the progressive thinkers and social activists, anyone who speaks against ruling govt. are being termed as anti-nationals which is against our democratic and constitutional values,” he said, adding “The mass killings and cases of lynching that are taking place in the name of cow and child trafficking is embarrassing for Indians present all over the world. He also told since the current government in India has no development works to present during upcoming elections, they are setting agenda to divide India on religious lines.” 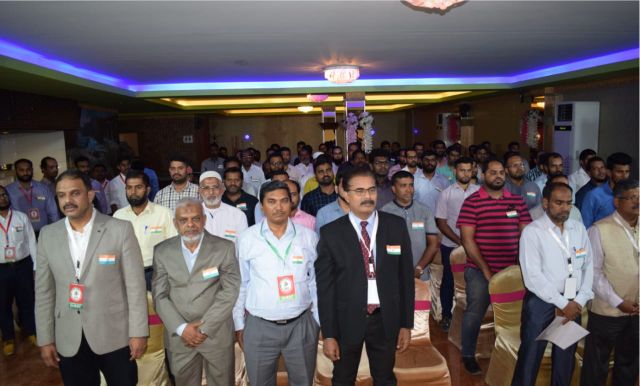 Gathering also requested for the special prayers for the people of Kerala and Karnataka suffering due to flood. The program concluded by singing national anthem.
Basheer Karandur, General Secretary of Social Forum Central Committee, welcomed the gathering and Central Committee member Rasheed Kasimi Kerala presented the vote of thanks. Abdul Basheer was master of ceremony.